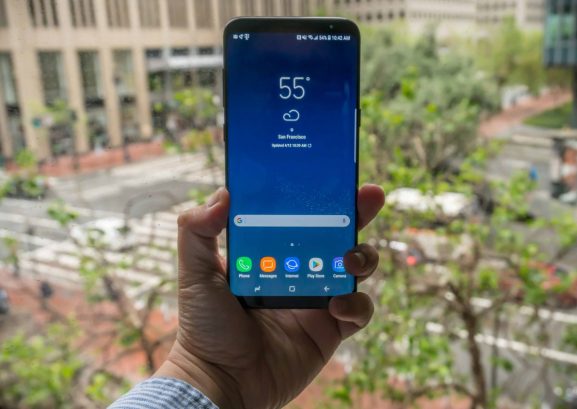 Samsung's Galaxy S8 is one of Google's ARCore platforms.

You’d think that multiple appliances literally on fire would slow the tack of a global brand like Samsung, but think again.

It’s been more than two months since Samsung launched its flagship Galaxy S8 phone, and despite record S8 preorders, the device still has no Bixby virtual assistant. Sources say the assistant, initially delayed until late May, will now launch in late June, Wall Street Journal reported today. The assistant is reportedly having trouble understanding English.

Overpromising and underdelivering doesn’t work, especially since in the fall the South Korea-based company had to deal with the flaming Galaxy Note 7, exploding washing machines, and the arrest of heir and de facto leader Lee Jae-yong.

Prior to the release of Bixby, Samsung bragged that Bixby-enabled apps could accomplish virtually any task, and would have the ability to understand users even if they provide incomplete information, statements that prompted me to write in March, back when people thought Bixby would launch with the Galaxy S8, that Bixby was already setting expectations too high.

Listen to product managers at tech giants like Google or Microsoft talk about their bots and assistants today and more than once you’ll hear the word “expectation” enter the conversation.

When the world believes intelligent assistants and bots should embody the intelligence of the talking machines from the future we’ve been told would exist one day, the management of expectations is key to the success of a product.

Even better than listening to product managers, watch any person interact with a bot. It’s true that chat app and voice interfaces can seem pretty simple, but users — either by their own error or a shortcoming of product design — always manage to make mistakes or get stuck.

People are still only beginning to get used to voice interfaces, and the field is growing with new entrants like Bixby and Andy Rubin’s new Essential Home.

Take Facebook Messenger bots or Siri, for example: People got the idea these bots could do a fair deal when they were first made available, only to be disappointed at the lack of smarts or features.

Underperformance from those promises leads to dissatisfied customers, something Samsung doesn’t really need after its products have literally been banned by the Federal Aviation Administration (FAA).

In both the shipping of Bixby and user interaction, things go wrong, but telling people things will be amazing then missing the delivery date means you better hit the mark once that product does become publicly available. Because expectations remain high, especially since Samsung said “Bixby will be gradually applied to all our appliances,” it’s about more than one smartphone.