Google has partnered with a number of notable technology companies to enable its users to hunt for jobs directly through Google Search and receive email alerts when relevant new employment opportunities arise.

The initiative represents part of the Google for Jobs program unveiled at the company’s annual I/O developer conference last month, where the internet giant revealed that it would soon begin scouring job listings posted across the web and bring them all together right within Google Search. Today, the grand plan is coming to fruition, with Google Search users in the U.S. — on both desktop and mobile — now able to view a collation of open positions based on their search query.

For example, if you’re searching for “head of catering” or “retail jobs,” you’ll see relevant positions based on your location — provided Google has been given permission to use your current location. Or you can use location-specific keywords, such as “retail jobs in Pittsburgh,” to home in on positions near you.

A particularly useful feature is the job alerts tool, which, when activated, lets you receive email notifications whenever new jobs are posted for a specific search query. 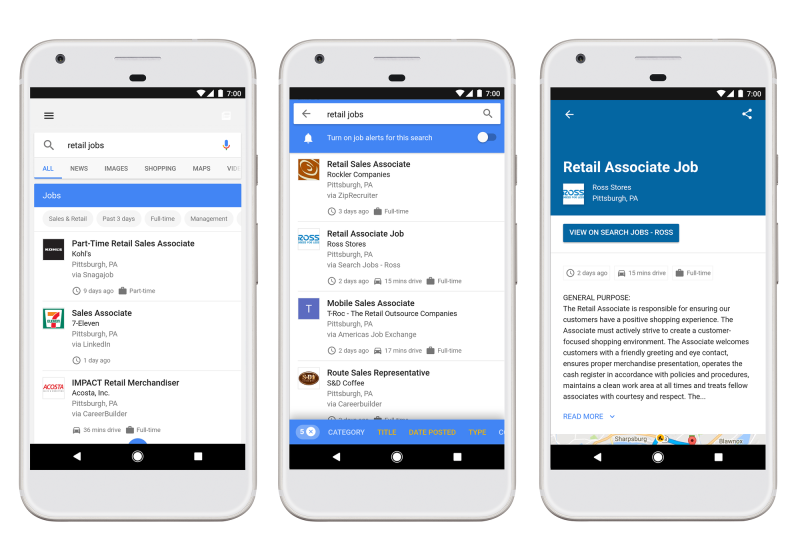 Google has partnered with the likes of Monster, CareerBuilder, LinkedIn, WayUp, DirectEmployers, and Facebook for the initiative. Additionally, Google has teamed up with Glassdoor, meaning some positions will display ratings and reviews for the employer beside the job description, while users who are signed into their Google accounts may also be able to see how long the commute would be from their home.

It’s worth noting here that employers who don’t use third-party websites to list their openings can also have their open positions included in Google Search by making a few tweaks to their website — they simply have to mark up their job listings with Job Posting structured data and submit a sitemap with a <lastmod> date for each listing.

While Google Search was once a gateway to content hosted on other websites, the search engine has emerged as more of a destination in its own right. In the past year alone, Google Search has opened up to display product comparisons and even song lyrics, which is in addition to the myriad other informational tidbits that now show up in Google Search, including nutritional data for fruit and vegetables.