Nokia today unveiled a new smart scale and digital blood pressure monitor as part of the company’s “rebirth,” Cédric Hutchings, Nokia’s VP of Digital Health, told VentureBeat in an interview at Nokia’s offices in San Francisco. As the company continues to transition away from the business of selling phones, digital health will play an increasingly larger role in the Nokia portfolio.

“We think we can emerge as a champion of this new market because we do have the right assets, both from the brand perspective and also from the portfolios we’re bringing in with Withings,” Hutchings said.

Nokia acquired Withings in April 2016 for $192 million, and today the entire Withings product line of activity and sleep trackers and scales, and even its smart hair brush, will adopt the Nokia brand name. Plans to kill off the Withings brand name were first announced by the Finnish company in February.

It must be said that a scale and blood pressure monitor are decidedly dull devices to roll out for the debut of the new Nokia.

What is cool about the Nokia Body Scale is that it can track the weight and body mass index (BMI) for up to eight people, and, starting at $59, comes in at a lower price than other Nokia scales, which cost $99 and $179, respectively.

The Nokia BPM+ blood pressure monitor costs $129 and is controlled through the Health Mate app. The device stores blood pressure and heart rate readings whether the smartphone is connected to the internet or not. 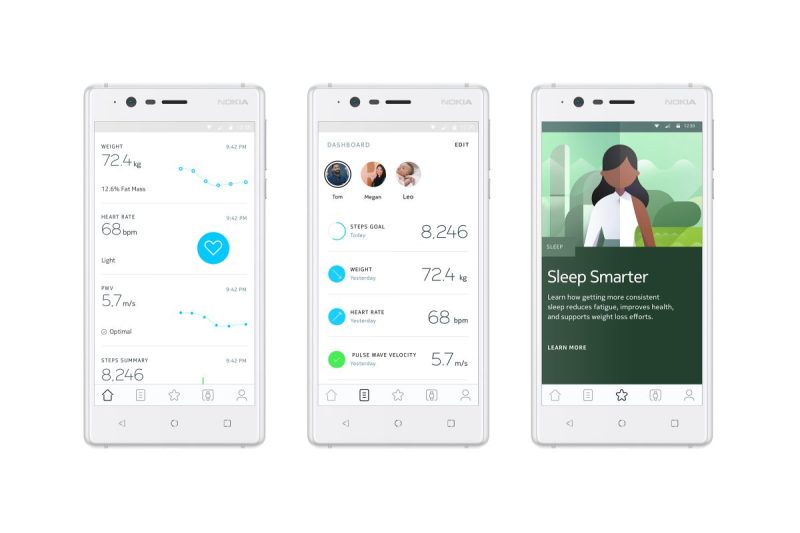 Revamped versions of the Health Mate app for iOS and Android are also launching today, with the addition of personalized coaching. Coaching programs available at the launch of the revamped app will each last eight weeks and include Sleep Smarter, Better Body, and Pregnancy Tracker. More will be added in the future, Hutchings said. All Nokia digital health devices will sync with the Health Mate app.

Nokia digital health products and coaching from the Health Mate app are designed for the average person, Hutchings said, not necessarily for health nuts or tech savvy first adopters.

“It’s about encouraging small changes,” Hutchings said. “It’s about health, not fitness. It’s about appealing to a much larger segment of the population that it’s important to bring actionable insights into our applications and services.”

While Nokia may be out of the smartphone business, the Nokia brand is not. HMD Global still makes phones using the Nokia name, and four such phones will be released this year, the first of which, the HMD-6, first came out in January in China.