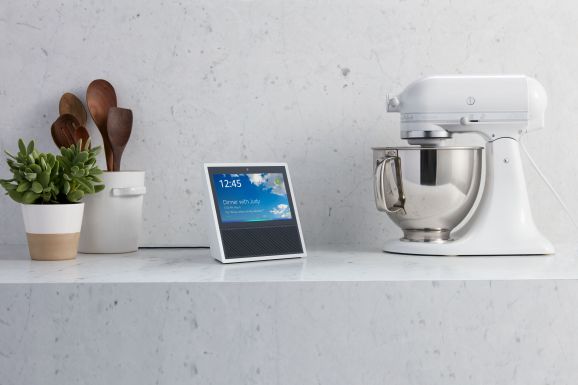 The $230 Amazon Echo Show went on sale for the first time last week, and with it came visual cards, video, and other elements developers can use to create Alexa skills. Beyond news and entertainment video, the largest category of the fewer than 10 visual skills available at launch was food.

Calorie counter Track by Nutritionix has added visuals telling you how many calories are in a food; OpenTable books restaurants; and you can now place Starbucks orders with the new visual interface.

The fact that food is popular early on among Alexa skills that utilize the new visual interface built for Echo Show isn’t a surprise — food sucks without visuals.

With voice alone, the Food Network skill was not sexy. The Alexa skill was blown away by experiences on the web or in an app because people want to know what food looks like.

Well, that’s not really an issue anymore, because on the Echo Show you can watch instructional Food Network videos to learn how to make dinner. Among the visual skills available at the launch of the Echo Show, Food Network’s is one of two that deliver cooking videos together with a recipe. Most videos I encountered were five minutes or less. You can also search for recipes based on the name of the chef, ingredient, course, or dish.

Find a recipe you like and Food Recipes will send it to you via email. Ask the skill “What’s on now?” and the skill will tell you what’s on Food Network now.

The fact that visuals were lacking at first may have made you desert the voice app at launch, but it’s worth checking out again — not just for the video, but because Food Network, like WikiHow and This Day in History, is one of the few Alexa skills that draw from a vast corpus of knowledge.

One thing I found lacking in the skill today is the ability to fast forward or skip ahead based on where I am in the process of cooking a meal. Echo Show doesn’t allow fast forwarding yet. It could be that I had chosen this recipe earlier and was a few steps in, but once I got started I got stuck; that is, I might want to start at step six instead of watching the entire video. I also don’t necessarily need (however pleasant it is) the commentary of and personalization by the Food Network personalities. I know some people love that touch of character, but sometimes I just want to know how to cook the best macaroni and cheese.

The Allrecipes skill also launched a new visual interface for the Echo Show. Allrecipes has a selection of tens of thousands of recipes as well as video. The upside, by comparison to the Food Network Alexa skill, is that when you connect your Allrecipes app to your Alexa account, the Allrecipes skill can access recipes you favorited on the app or website, instead of starting a search from scratch.

YouTube on Echo Show can also help you make a meal. Just say “Alexa, show me YouTube videos of how to cook macaroni and cheese” and up pops a series of choices. This of course lacks the option to have the full recipe sent to you, but most of these DIY videos are smart enough to include a link to the recipe in the show notes.

Several other cooking and DIY apps with visual elements are sure to join the Alexa Skills Store.

A sleeper scenario for how Alexa-enabled devices with a visual display could change the way you make dinner could be a Whole Foods Alexa skill.

There’s no Whole Foods Alexa skill today, but that can’t be true for much longer, since Amazon acquired Whole Foods two weeks ago for $13.7 billion.

When one does emerge, it could adopt an approach similar to the Whole Foods Facebook Messenger bot launched at MobileBeat last year. You send this bot items on your shopping list and it returns recipe suggestions. If the same approach is taken to the ingredients you have in your fridge, that could be a worthwhile experience. Add instructional videos and tie this to your local Whole Foods or your Amazon Pantry and you may feasibly have no reason to shop elsewhere.