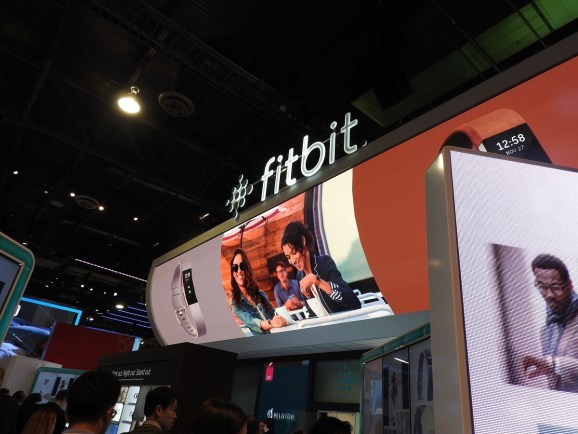 Fitbit was among many fitness wearable companies at the Sands Expo at CES 2017.

The world might be collapsing around Fitbit, but, by golly, these folks seem determined to take one last tilt at the windmill.

Even before Fitbit released its earnings yesterday, the company had gained distinction for having one of the worst ever tech IPOs. A few weeks after its IPO in June 2015, Fitbit stock peaked at $47.60 per share (in July 2015). Yesterday, it closed at $5.07 per share.

During the second quarter, the company reported revenues of $353 million, down from $546 million for the same period one year ago.

But if hope is the thing with feathers, as Emily Dickinson once wrote, then it appears Fitbit sports robust plumage.

The company confirmed yesterday that its first smartwatch will be released in time for the holiday season.

“Our upcoming smartwatch device will deliver a combination of features that consumers have not yet seen in a smartwatch, including a health and fitness-first focus, cross-platform compatibility, water resistance to 50 meters, industry-leading GPS tracking, and an easy-to-use software developer kit that will enable innovation and deeper connections to the health care system,” Fitbit CEO James Park said on a call with analysts. “All of this will come with multi-day battery life at an attractive price.”

Fitbit’s public market debut came just a few weeks after Apple released its first smartwatch in April 2015. There have been periodic debates about Apple Watch in terms of whether it can be considered a hit or a miss. But it’s clear that Apple has become by far the global leader for smartwatches, with a 63 percent marketshare in Q4 2016, by one measure. And Apple just said in its earnings call that its Apple Watch sales in the quarter ending June 30 rose 50 percent from the same period a year ago.

So Fitbit will need to convince folks to invest in a gadget released by a company with a shaky financial future that’s competing against the world’s most valuable company.

In fairness, we must acknowledge that until the first quarter of 2017, Fitbit was the global leader in wearables. But Xiaomi and Apple surpassed it this year, according to IDC, and that’s unlikely to change even with its upcoming smartwatch debut.

Plunging into the smartwatch business, even after having bought smartwatch startups Pebble and Vector, seems the longest of long shots at this point. Let’s hope for Fitbit’s sake that consumers are willing to give it that shot.