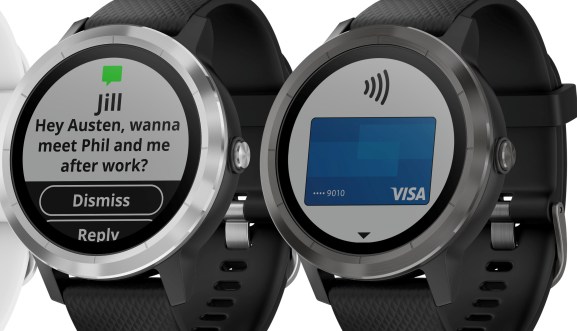 Garmin has become the latest tech giant to embrace mobile payments, as the GPS navigation and wearables company today announced the launch of Garmin Pay.

The contactless payments service arrives first on the company’s new $300 Vívoactive 3 smartwatch. Powered by FitPay, a white-label contactless payments platform aimed at the burgeoning wearables and IoT realms, Garmin Pay supports both Mastercard and Visa cards from “major issuing banks.” After manually adding your card to the Garmin Pay wallet, you can pay for goods in stores by scanning your wrist at checkout.

By building both GPS and contactless payments into the device, Garmin is looking to solve a problem familiar to millions of fitness enthusiasts around the world. Why carry your phone and wallet with you on a long run when you can pack your every need into a wrist-worn contraption?

“Anyone who is out and about being active can relate to the struggle of where to stash a credit card or cash, and has had to forgo a post-workout snack or coffee as a result,” explained Garmin’s vice president of worldwide sales, Dan Bartel, in a press release. “We’re solving that dilemma with Garmin Pay, an exciting feature on the new Vívoactive 3. Use it pretty much wherever contactless payments are accepted, and give yourself one less thing to remember when you’re leaving the house.”

One point worth noting here is that the Vívoactive 3 doesn’t have music capabilities built in, so if you do like to listen to tunes while pounding the pavement (or the trails), you will still have to carry a secondary device with you. With that in mind, Garmin’s latest watch is capable of controlling music on your smartphone, but it is a shame you’re not able to pack some tracks onto the watch itself.

Today’s news comes just a few days after Fitbit announced its first-ever smartwatch, the $300 Ionic, which promises water resistance, GPS, heart rate monitoring… and a brand new contactless payments service called Fitbit Pay. To say that the mobile payments space is heating up is something of an understatement, with Samsung Pay, Android Pay, and Apple Pay already vying for consumers’ attentions.

The wearables market grew 18 percent in Q1 2017, according to a recent IDC report, with Xiaomi and Apple nudging Fitbit into third place in terms of market share. Garmin remains one of the top five wearables companies in the world, however, sitting behind the three aforementioned companies and Samsung.

The Vívoactive 3 is available in three colors — black/stainless and white/stainless, which cost $300; and black/slate, which has a suggested retail price of $330. Garmin also announced today the Vívomove HR, which the company calls its first touchscreen hybrid smartwatch.