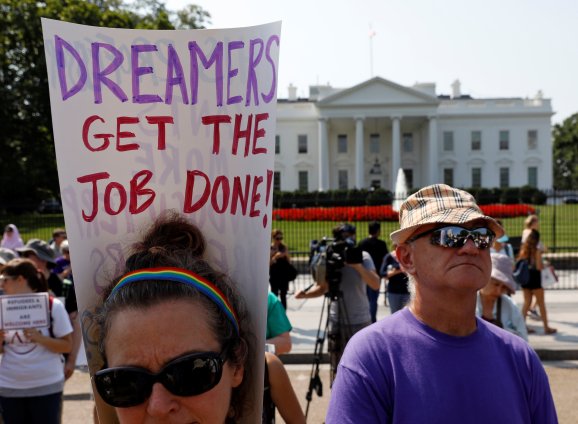 Demonstrators hold signs during a protest in front of the White House after the Trump administration scrapped the Deferred Action for Childhood Arrivals (DACA), a program that protects from deportation almost 800,000 young men and women who were brought into the U.S. illegally as children, in Washington, U.S., September 5, 2017.

In its earliest days, Silicon Valley was happy to eschew national politics. The availability of venture financing and the focus on emerging technologies that, for a while at least, were nurtured beyond the attention span of mainstream consumers left tech startups isolated from the political controversies of the day.

As startups grew larger and more influential, tech companies like Apple, Microsoft, Google, and eventually Facebook found themselves subject to regulatory scrutiny. Many responded with activities like lobbying or advising government officials, which conferred a political savvy typically associated with older, heavily regulated industries like finance and health care.

But it took the Trump administration to galvanize that political acumen into something more like activism — speaking out on issues not simply to protect the bottom line, but because tech leaders believe something very wrong is happening. In January, many decried the Muslim travel ban. In June, industry leaders spoke out against Trump’s decision to pull out of the Paris climate accord.

Now that Trump has ordered an end to an Obama-led program that protected immigrants brought into the U.S. illegally as children, tech companies are being more full-throated in their protests. In ending the program known as Deferred Action for Childhood Arrivals, or DACA, Trump leaves Congress six months to decide the fate of roughly 800,000 young people.

In general, tech companies rely more on the H-1B visa program than DACA to employ immigrant workers. Last week, when reports emerged that Trump might end the DACA program, companies like Apple and Microsoft vowed to protect the Dreamers, as the DACA beneficiaries are known, who work for them. An open letter to Trump organized by FWD.us and signed by 300 business leaders urged him to protect Dreamers from deportation.

“Our economy would lose $460.3 billion from the national GDP and $24.6 billion in Social Security and Medicare tax contributions,” the letter read, in an appeal to a president who campaigned as pro-business. “Dreamers are vital to the future of our companies and our economy. With them, we grow and create jobs. They are part of why we will continue to have a global competitive advantage.”

After Trump moved to rescind DACA, Microsoft president and general counsel Brad Smith followed up with a statement saying the company was “deeply disappointed,” and then took the additional — and, for the tech industry, rare — step of telling Congress what to do in response.

We believe this means that Congress now needs to reprioritize the fall legislative calendar and move quickly with new legislation to protect these 800,000 Dreamers. This means that Congress should adopt legislation on DACA before it tries to adopt a tax reform bill… If Congress fails to act, our company will exercise its legal rights properly to help protect our employees. If the government seeks to deport any one of them, we will provide and pay for their legal counsel. We will also file an amicus brief and explore whether we can directly intervene in any such case. In short, if Dreamers who are our employees are in court, we will be by their side.

In an interview on NPR, Smith further stated that if the federal government tries to export any of the 39 Dreamers employed by Microsoft, “it’s going to have to go through us to get to that person.” This carries some weight because the federal judge in Seattle who blocked Trump’s travel ban cited a motion from Microsoft that argued the ban would create irreparable harm.

Facebook CEO Mark Zuckerberg delivered a similarly blunt message. “This is a sad day for our country,” he wrote on Facebook. “The decision to end DACA is not just wrong. It is particularly cruel to offer young people the American Dream, encourage them to come out of the shadows and trust our government, and then punish them for it.”

Zuckerberg urged U.S. voters to call their Congressional representatives, while stopping short of the legal commitment that Microsoft made to its DACA employees. Instead, he noted that FWD.us, which he cofounded, is working to provide protections for Dreamers.

Apple CEO Tim Cook sent a letter to the company’s employees in which he expressed deep dismay over the situation and vowed to work with Congress to find a way to keep any affected employees in the U.S., as well as providing support from immigration experts for the families of the 250 Dreamers Apple employs.

Uber chief technology officer Thuan Pham recounted a perilous journey he made with his family from Vietnam before landing in the U.S. as refugees with little more than hopes for a better future. “Our community has always been about what brings people of every background together,” Pham wrote in a post urging DACA’s preservation. “We’ll continue to stand by immigrants who want nothing more than to contribute to our country and pursue the American Dream.”

In a statement, the Entertainment Software Association also expressed support for preserving DACA. “ESA supports swift Congressional action on DACA. Our nation’s competitiveness depends on creating opportunities for all, including giving today’s Dreamers a chance to be among tomorrow’s innovators.”

Other tech CEOs took a more muted approach, turning to social media to voice their displeasure in brief, bland statements. Google CEO Sundar Pichai tweeted that “Congress needs to act now,” while an anonymous IBM account tweeted that “we stand by our IBM #Dreamers.” Jack Dorsey, the part-time CEO of Trump’s preferred bullhorn, tweeted his own 113 characters of disgust.

Completely unnecessary and cruel. Ending #DACA is a crushing blow to those who want to contribute to our future. https://t.co/Cpu0J01ioK

Depending on how Congress responds to the end of the DACA program, tech companies may find themselves having to respond even more forcefully to impending deportations of Dreamers, not just on Twitter but in courtrooms.

As welcome as that resistance would be to the Dreamers in question, the outcry among tech companies today also comes as some of them pursue policies that are far from noble — ISPs that are eager to kill net neutrality, say, or digital media companies that resist consumer data protections. That’s unlikely to change in the era of Trump, and it may even grow worse.

At the same time, it’s not only easier in 2017 for these tech giants to stand against policies that many of their employees and users oppose, it’s harder for them to stay silent. Uber faced a backlash after waiting too long to object to the Muslim travel ban. Whether motivated by idealism or cynicism — or, more likely, a mix of both — the increasing volume of objections coming from tech leaders is hard to ignore at a time when Washington is listening more closely to what Silicon Valley has to say.