Google has announced a new mobile payments app for India as the internet giant moves on its mission to ingratiate itself with the “next billion” internet users across the country.

Available on both Android and iOS, the Tez app can be used by anyone to pay friends, local merchants, or even online sellers. The system is built on India’s Unified Payments Interface (UPI), which is basically a way for banks to transfer money to one another directly and instantly, based on a single identifier, thus bypassing the need for a billing processor.

The push for India

India has emerged as a key focal point for Western tech firms, with Apple committed to selling iPhones manufactured in Bengaluru, Intel spending $178 million on a new “smart and green” R&D facility in the country, Facebook showing growing interest, and Amazon opening its first AWS data center in Mumbai.

Google, for its part, has been going all in as it targets new and existing internet users in India with a range of initiatives that include launching public Wi-Fi hotspots and an offline-first YouTube app. It also beat Spotify to launch its music-streaming service in India back in April.

India has been slower to adopt smartphones and internet usage than many other markets, but as of 2016 it had more than 300 million smartphone users — a figure that can only grow in a country with a population of 1.3 billion. That is certainly why there has been a concerted effort from tech companies to get more people online and using their services.

Some Western countries, such as Sweden, are close to becoming completely cashless, but paper and coins remain a popular payment method in India — something that Google wants to address with Tez.

“The internet is becoming a daily part of life for many Indians — that includes messaging friends and family, searching the web for information, reading news, watching music videos, or playing games,” noted Caesar Sengupta, vice president of Google’s “next billion users” team. “But when it comes to paying for things — vegetables, bus fares, splitting the bill at dinner, or paying on delivery for something purchased online — those smartphones often go unused. Out instead comes… wads of paper. Indians love cash.”

Google may be hoping to compete with cash, but the company also recognizes its benefits — for example, cash lets you pay for things without the recipient learning your personal information. With that in mind, Tez (which is Hindi for “fast”) offers a “cash mode” for local peer-to-peer (P2P) transactions. Activating this allows you to pay for goods without sharing private information, such as phone numbers or bank accounts.

It’s worth noting here that this feature only works when paying another Tez user, but the proximity-based payments feature — which uses audio QR (AQR) to transmit data — opens the system to many more devices. Near-field communication (NFC), which is what Google’s Android Pay is based on, requires NFC-enabled phones in order to work — and many lower-end Android devices do not have NFC. Similarly, Apple has historically restricted NFC access on iPhones to Apple Pay.

With Tez, two devices just need to be brought close together, with the respective users hitting “pay” or “request” to initiate the transaction. 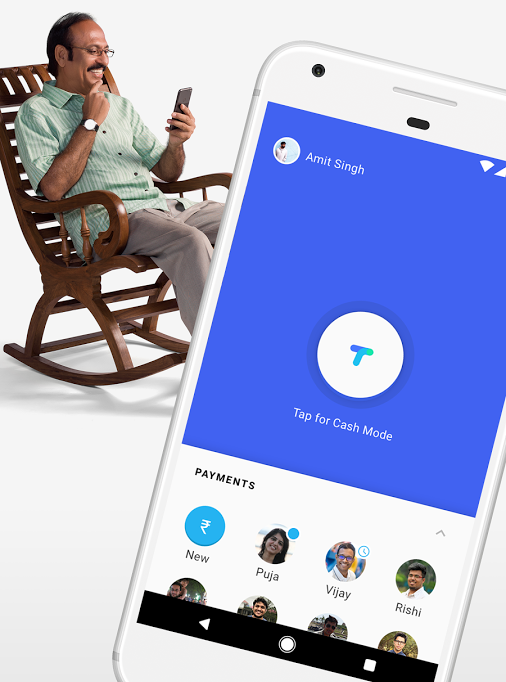 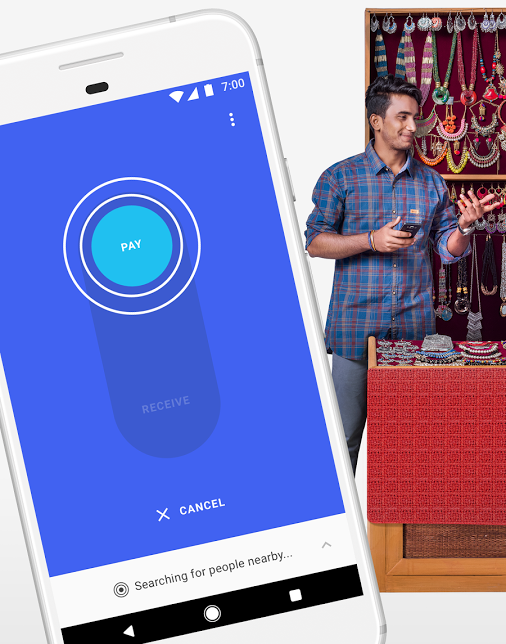 Tez is compatible with bank-to-bank payments covering more than 50 Indian financial institutions, and while its basic incarnation allows businesses to accept payments directly into their bank accounts, Google is also touting a separate Tez for Business program. This allows companies to interact with consumers through a dedicated business profile channel within the Tez app, where they can accept payments and offer deals. They will also be able to accept payments for goods through their mobile websites.

Google’s contactless Android Pay digital wallet service has yet to make it to India, so it’s not clear yet whether Tez is being launched instead of Android Pay — it certainly seems like that could be the case. However, reports from earlier this year suggested that Android Pay would be coming to India sometime this year.

Samsung actually beat both Google and Apple to launch its mobile payments service in India back in March, with the Korean tech giant integrating India’s UPI into the Samsung Pay app, as well as Indian commerce platform Paytm.

Google added that it has big plans for Tez moving forward. “We’re just getting started,” continued Sengupta. “This is the first step on the long and important journey toward enabling a cashless India — a crucial component of a digital India.”

Though the initial version of Tez was built with India in mind, the company stated that it would be introducing the app to other emerging markets in the future.