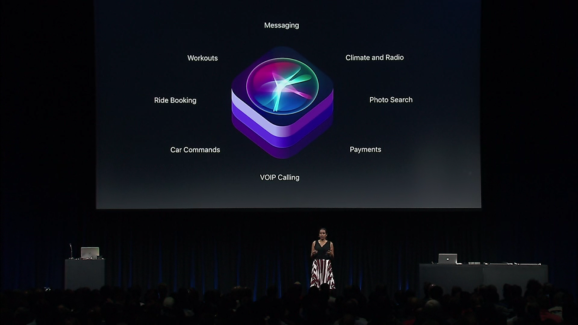 The debut of iOS 11 this week brought changes that include augmented reality games and a better iMessage experience, but perhaps no aspect of the operating system was more changed than Siri.

Siri has gained more than a dozen new features, from the potential to share your social media account with a QR code to a more expressive voice and the assistant’s newfound ability to act as your personal DJ. Here’s a rundown of all the ways Siri is shaking things up in iOS 11.

With iOS 11, Siri learns from your habits and syncs those preferences across all your Apple devices. Got four people named Brianna in your contacts but you really only call one? Siri can now remember that on your iPhone, as well as on your computer, so the next time you say “Call Brianna,” Siri knows which friend you’re talking about.

Siri can learn similar preferences about things like your favorite restaurants or sports teams.

This could be the beginning of something big. Translations are available from English to Mandarin Chinese, Spanish, Italian, German, and French. It’s no Babelfish, but it’s quick and, as long as you don’t pause too long mid-sentence, it can perform some pretty lengthy translations. While you remain in a session, Siri will remember the language you’re translating to — so you can just say “Translate” before every sentence rather than constantly repeating “Translate English to Spanish.” Each translated passage also comes with a play button so it can be repeated as many times as you want.

One downside: Each session with Siri disappears when your phone locks or you navigate away from the conversation, and the translations you’ve asked for aren’t saved anywhere.

HomePod will have a Personal DJ, as well, though an Apple spokesperson declined to comment on whether Siri in a smart speaker will function differently from the Personal DJ in iOS 11.

After answering a question, Siri can now offer additional suggestions, so when you ask about the score of a baseball game, you may get not just the score but also your favorite baseball team’s standings, schedule, or roster. Siri has also gained the ability to include lists for you to browse in the results when you ask a question.

So if you say “Hey Siri, who are the members of the Jackson 5?” Siri will show you a card with a list of members and, for the first time, give you the chance to navigate back and forth as you view summaries about the band members.

Siri’s new voice was made possible by first identifying the tone, pitch, and sounds (called phonemes) in natural human speech. Natural language processing is used to understand the words spoken, and the inflections and identified phonemes are now stitched together with help from machine learning to make Siri’s voice, whether male or female, more expressive.

Siri with iOS 11 can bring up your account balances and inter-account transfers from apps that use SiriKit. The new abilities continue the extension of personal finance services into Siri via SiriKit, the toolkit for developers to connect their app with Siri. With iOS 10, app developers gained the ability to have Siri carry out peer-to-peer payments, and the 10.3 update added the ability to display or pay bills with your voice. Enhancements to SiriKit were first announced in June at WWDC.

It doesn’t appear as if many apps have adopted these new SiriKit integrations yet, but it’s easy to see how they could be used.

For example, in June Apple mentioned WeChat as a great use, though its SiriKit integration does not appear to be live just yet. If it was, you could say “Hey Siri show my WeChat pay code,” and a QR code would appear on the lock screen for a vendor or checkout counter employee to scan. Other apps also have the ability to implement payment using SiriKit.

Likewise, SiriKit in iOS 11 will allow apps to use QR codes as a way for you to share social media profiles with a friend or colleague. Say you meet someone at a conference and you want to exchange information; you could hypothetically say, “Hey Siri, show me my LinkedIn profile code” or “Hey Siri, show me my Facebook page QR code.”

What makes this especially cool is that in iOS 11, the camera has a native QR code and barcode scanner, so in the conference use case, you can just snap each other’s code. To scan, just open up your camera and point it at a code.

Another Sirikit addition supports productivity apps to add, modify, or manage reminders or lists in apps like Evernote and Todoist.

The native iOS News app with Siri now learns from the stories you read and then shares recommendations in your feed and notifications based on your previous activity. What you read in News can even affect suggestions Siri makes in Safari. If you’ve been reading about the Mexican Riviera in News, for example, Siri may now share related suggestions when you’re in the Safari search bar.

Say you’re in the middle of a conversation with a friend you’re going to meet up with and they ask how far away you are. If you’re getting directions from the Maps app, Siri will list your estimated time of arrival in your QuickType suggestions. Based on your recent activity, Siri can also surface other suggestions, like names of movies or places. This adds to previous QuickType additions like Share Your Location or the ability to display a friend’s phone number when their name is invoked in a conversation.

This isn’t actually new, but it’s more visible thanks to a “Tap to Edit” invite you now see each time you say “Hey Siri.” Each time you ask Siri a question or make a request, you can tap that text to edit it the same way you would any other kind of text, and then ask again. This could be especially helpful when it comes to hard-to-spell words or phrases.

WatchOS 4 is not iOS 11, but there are some similar functionalities worth mentioning here as part of Apple’s efforts to deliver greater personalization through Siri.

Siri in watchOS 4 attempts to understand the context of your daily activities and serve up relevant results on your wrist. It may tell you about your calendar when you get to work, provide a traffic update for the trip home, give you control of smart devices around you, or offer newly shared family photos or workout suggestions in the evening.