About a year ago, we published our first data insights report at Dashbot after having processed 30 million messages. A year later, we’ve processed over 10.5 billion messages and have more insights to share.

We like to show what the most common messages into chatbots are, and we also wanted to share data on the responses.

The following are the top messages bots receive, as well as the top stickers sent to bots over the past two months. 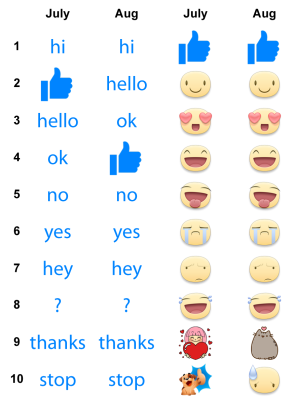 The top messages are still “hi” and “hello” — unsurprising, as these are the natural way we start conversations. More than 50 percent of chatbots received these messages over the past two months, but how did they respond?

The downside is that 32 percent of bots last month responded with unrelated, error, or “I don’t know” messages, and a small percentage didn’t respond at all! This can be a huge turnoff and send the conversation in the wrong direction right from the start. 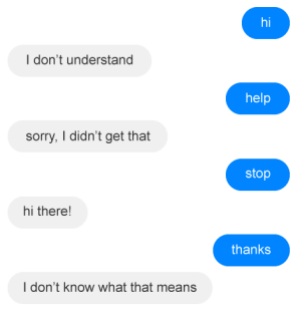 The space is still relatively new. Having a response to requests for help can actually be very … helpful.

About 20 percent of bots over the past two months received a “help” message from users. However, only about 50 percent of those responded with some form of help, menu options, or even an acknowledgment of the request.

Chat interfaces can be great for this, making it possible to easily communicate with users and keep them updated with the latest info.

However, it’s important to give users the ability to manage, pause, or stop these messages. More than 20 percent of bots receive a “stop” message, yet only about 40 percent of these actually responded appropriately by giving the user info on how to stop messages or update their settings, confirming the stopping of messages, or just outright stopping.

Adding “stop” or “pause” functionality can mean the difference between a blocked user and a retained one. One of our customers has a sports bot and they noticed fans would block their bot when their favorite teams were losing. The company paid to acquire these users and then had to pay to re-acquire them after being blocked. Adding a mute functionality enabled users to pause score updates when their team was losing and enabled the company to retain the user.

Thanks or no thanks?

Growing up, we’re taught to be polite, to remember our pleases and thank yous.

Of the bots that received thanks, about 60 percent responded with an appropriate message, such as a sign of appreciation, a “you’re welcome,” or a “thank you” in return.

About 40 percent, however, responded with a typical error, “I don’t know,” or unrelated message.

What should you do?

We’ve seen it with customers who add support for these common messages as well as adding responses for different content types. One of our customers receives images and audio from their users even though that’s not a core use case of their bot. This customer decided to respond to these content types in a fun and quirky way, and they saw engagement go up overall.

While responding to common messages can increase engagement, it’s important to look at your own data and see what your users are saying, or sending, to your bot.

The beauty of conversational interfaces is that users will tell you what they want from the bot and what they think of the bot’s response afterward, which sometimes isn’t too pleasant. But it is an opportunity to learn what your users want, and it can help you decide whether to add support for additional use cases. 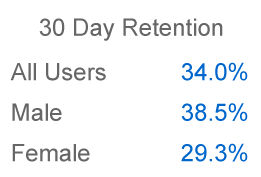 The good news is that 30-day retention for Facebook bots is still on par with that of bots in mobile apps. We currently see a 34 percent retention rate on Facebook, compared to 36 percent on mobile (based on Localytics). Interestingly enough, men tend to have higher 30-day retention rates — 38.5 percent versus 29.3 percent for women.

Conversation is a two-way activity, which means it’s important to monitor the incoming and outgoing messages of your bot and to iterate on any responses. Doing so well will pay off in increased user engagement and retention.