Amazon and tech training app Codecademy have collaborated to create a series of free courses. Available today, the courses are meant to train developers as well as beginners how to create skills, the voice apps that interact with Alexa.

Since opening Alexa to third-party developers in 2015, more than 20,000 skills have been made available in the Alexa Skills Store.

Among the four free courses being offered, the two available today are “Build Your First Alexa Skill” and “Create Your Lambda Function” for dealing with the AWS Cloud. Additional courses on gathering user input and adding persistence to DynamoDB are coming soon. Codecademy teaches dozens of courses in JavaScript, Python, Ruby, and other languages. This is the first voice app training course provided by Codecademy.

At a time when it appears voice could become the next great shift in how people get things done with computers, the most popular voice app platform seemed like a good place to start, Codecademy CEO Zach Sims told VentureBeat in an email.

“These courses were created to be accessible to anybody regardless of prior coding knowledge, so the ideal candidate for them is truly everyone,” Sims said. “You don’t even need to own an Echo device because our courses embed the Echo simulator, which lets you speak to Alexa right through the Codecademy app.” 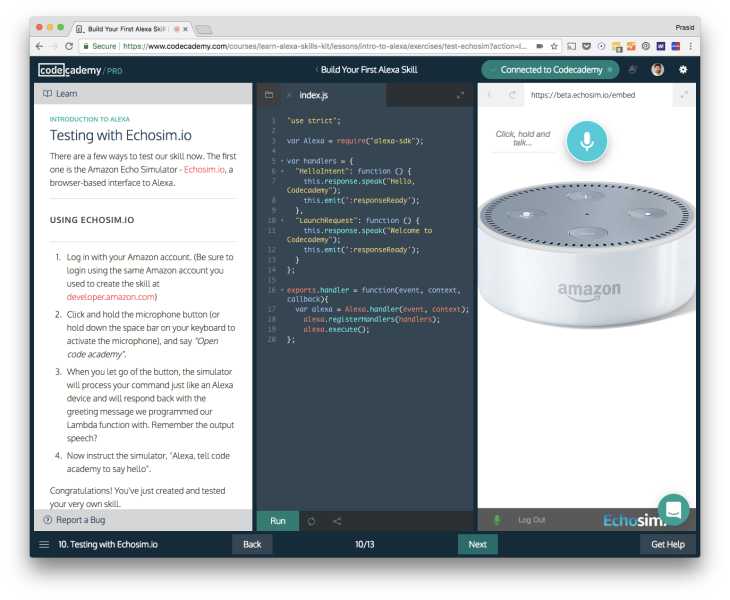 In June, in partnership with Intel, Amazon launched Dev Days, a series of training events in major cities across the United States and Europe.

Last December Coding Dojo published free training videos on how to create an Alexa skill, and this summer Amazon partnered with Coding Dojo in six locations around the country from Silicon Valley to Washington D.C. in an attempt to train 1,500 developers how to create Alexa skills. A series of training resources are also provided on the Amazon Alexa developer website.