In July, Microsoft introduced Microsoft 365, a new set of commercial offerings to package, and for its partners to sell, Windows 10, Office 365, and related enterprise mobility and security offerings. At the time, the company unveiled two versions of Microsoft 365: Enterprise and Business. Now it’s adding two more.

Microsoft 365 F1 includes Office 365, Windows 10, and Enterprise Mobility + Security. It offers updates to Windows 10, including the deployment and management of remote devices and configuring locked-down single purpose experiences, and enhancements to Microsoft StaffHub, an app to help firstline workers manage their workday.

Microsoft estimates there are 2 billion firstline workers (or 80 percent of the global workforce), which it describes as the employees who are the first point of contact between a company and its customers, who are directly involved in making products, represent a company’s brand, and see products and services in action. They form the backbone of many of the world’s largest industries, but have been largely left behind during the economy’s digital transformation, according to Microsoft. 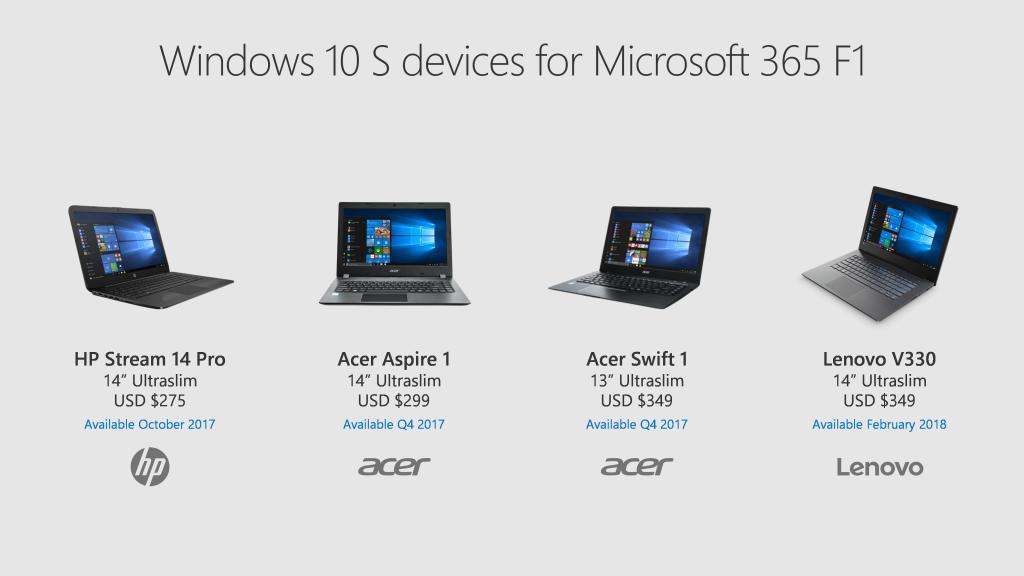 As for the new devices, they offer self-service deployment and simplified management, staying always up-to-date. As you might expect, these devices are aimed at students, educators, and firstline workers.

In other device news, HP, Lenovo, Panasonic, Toshiba, and Fujitsu will join Surface in supporting Windows AutoPilot by providing device IDs to companies beginning in January 2018.