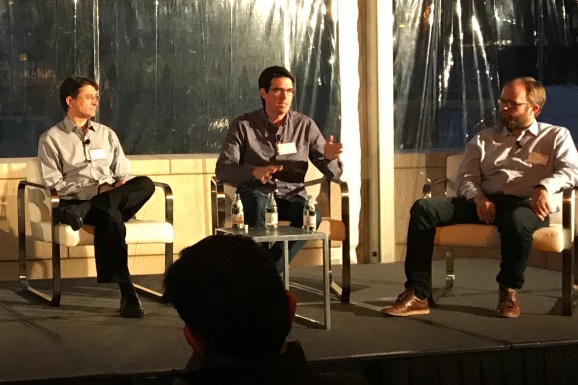 Voice-powered interactions with devices are likely to be a defining characteristic of computing over the course of the next decade, according to Siri co-creator Adam Cheyer. He shared his thoughts about the future of AI assistants last week on a panel that included Google Assistant product director Gummi Hafsteinsson (who also worked on Siri), Amazon Alexa senior project manager Ashwin Ram, and Microsoft Cortana product team leader Jordi Ribas.

Cheyer created Siri with Dag Kittlaus and Chris Brigham before the assistant was acquired by Apple in 2010. In 2012, Siri’s creators united to create Viv Labs, where they built another AI assistant. The company was acquired by Samsung for around $215 million last fall.

Cheyer said the Viv Labs philosophy was that every 10 years or so the way people do their computing changes. In the 1980s, personal computers dominated. In the 1990s, the web began to take hold. Starting around 2007 with the iPhone, mobile dominated. Now we’re 10 years past the launch of the iPhone, and Cheyer believes all the essential technology needed to “make a huge leap” in voice is here and it won’t be long before everyone’s personal assistant plays a big part in the computing they do.

“All of these companies are pouring in probably billions of dollars, and what’s at stake is incredibly important, nothing less than a decade-long paradigm,” he said. “When I say ‘paradigm’ I define it as ‘every connected business will be transformed’, just like they were for the web, just like they were with iPhone and iPad and other tablets and phones. And every connected user will spend a significant part of their computing through this paradigm. And when that’s achieved — which I think is doable in the next two to three years, all of the companies here are trying. We’re still in the early days, like the web when websites were ugly and not so interactive, but you can see it emerging, and I think you’re starting to see it.”

“Could these things be smarter?” he asked. “Absolutely, but I think the technology we have is capable enough to take us into this next decade where every one of us has a personal assistant they rely on to do a lot of what they do on the web [today] through speakers and cars and phones.”

The event was hosted September 20 by Menlo Ventures, an investor in Siri, at the St. Regis Hotel in San Francisco.

During the panel, called “Say ‘Hello’ to Your New AI Family Member,” questions from the audience and Menlo managing director Shawn Carolan turned to the integrations or third-party ecosystems each of the major players in the space is attempting with their respective AI assistant.

Echoing previous statements that only a few winners will emerge in every paradigm — Microsoft and Intel in the PC days, Google and Amazon for the web, for example — Cheyer said he wants to see a world where a small number of assistants rule but grant access to third-party services seamlessly.

“Will the assistant be more one assistant for everybody, kind of like today — Siri is the same for pretty much every assistant — or will you have an experience that’s highly tailored, maybe down to the personality, the name, the functions? Those are two points that will be interesting to see how they turn out,” Cheyer said.

“I don’t want to have to remember what a car assistant can do, the TV system do, the Alexa versus Cortana versus … too much. I want one assistant on every device to access every service without any differentiation between what’s core and what’s third-party,” he added.

Learning to work together

Cortana product team leader Ribas revealed that since Microsoft made a deal to partner with Amazon — so Alexa can speak to Cortana and Cortana can speak to Alexa — Microsoft has begun to speculate about the direction the AI assistant space is heading.

“I think partly what we did with Amazon, partnering with Alexa and Cortana, is a bit of a realization that we want to make a bit of a bet in the direction that it’s going to be — more like the web — and that there will be these assistants like Amazon … obviously, Alexa will be the best assistant for shopping on Amazon. And what we aspire to, obviously, is Cortana being the best assistant that works [across] Microsoft Office 365,” Ribas said.

“I imagine every company that will be building agents will also be using third-party agent tools and that they will specialize. Time will tell — obviously a lot of things need to happen. Definitely a lot has happened. We’ve come a long way, and we have a long ways to go.”

Google Assistant lead Hafsteinsson added that everyone, including Google, is still trying to figure out where to go with third-party apps.

“I think if you look at all the players in the space, we’re all looking to make it in a way that [third-party developers] can participate, but I don’t think we know a perfect solution yet. So we have our assistant apps — Cortana and Alexa have the same thing. Cortana and Alexa are working together; I think we’re all trying to figure out exactly what kinds of interactions will work when it comes to third-party services that are brought into the product. But exactly how is that going to pan out?” he asked.

“I think we’re still experimenting and trying to expand, because, really, I think, from my point of view, it has to preserve the user experience and it has to be easily used, it has to be natural. And bridging between a natural language interface and all these services is a big challenge.”