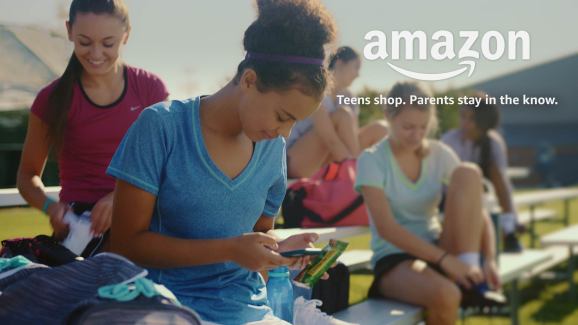 Amazon has announced a new service that will open its gargantuan ecommerce platform up to millions more teenagers.

Until today, shoppers had to be 18 years of age or over to buy goods through Amazon, but 13- to 17-year-olds will now be able get login credentials that are associated with their parents’ Amazon account.

To get the ball rolling, parents must enter their kids’ contact information and indicate which of their payment cards is to be used for purchases. The kid then receives an invite and chooses their own username and password.

But fret not, kids aren’t given carte blanche to buy whatever they want — parents are able to decide on an approval process. They can elect to receive a text or email that shows the cost of an item and the shipping address, while the kid can add a personalized plea to win approval, such as: “I need this new shirt for church.” More trusting parents can elect to sidestep per-item approval and simply set an overall maximum budget. Reflecting the way kids tend to use the internet these days, the new shopping system only works through Amazon’s mobile app.

Notably, kids can also access their parents’ Prime membership at no extra cost through this setup.

This all feeds into Amazon’s grand plan to get everyone sucked into its ecosystem. Earlier today, the company announced a new monthly payment option for Prime Student subscriptions, while a few months back it introduced a 50 percent Prime discount for people on government assistance programs.

In many ways, it’s surprising that the company has taken this long to open Amazon up to younger teens. But this new feature will likely garner groans from millions of parents — it just got that much harder to keep their kids from shopping online.

It also feeds into a growing pattern we’re seeing across the digital realm, where kids who have grown up with the internet are seeking more autonomy over their online activities and parents aren’t yet ready to give complete control to their offspring. Just a few weeks back, Google officially launched its Family Link app to enable U.S. parents to control their kids’ devices remotely. While kids do have a degree of control over their phone or tablet usage, parents ultimately have the final say. And that is exactly the balance Amazon is hoping to strike by partially opening its ecommerce inventory to teens.

The new teen-focused service is only available in the U.S. for now, and Amazon wouldn’t confirm whether it would be made available globally too.