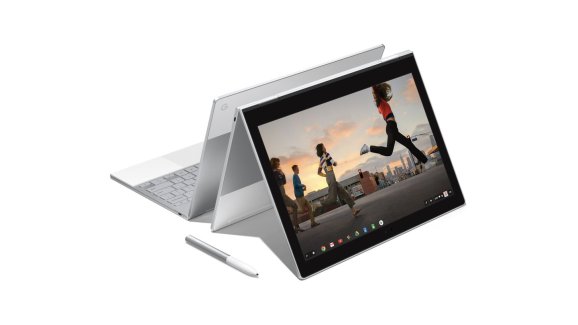 Chrome OS has come a long way from its start as an operating system that could only run Google’s browser and a set of applications built to run inside a limited environment. The Pixelbook is the company’s latest push to make the OS attractive to a wider audience by housing it inside a sharp-looking high-powered Chromebook that also works as a tablet.

Google is hoping that the new hardware will attract customers to other, lower-cost Chromebooks and offer those looking for a bit more performance something new to try. One of the key benefits of the new hardware is that the powerful machine could appeal to high-ranking executives at a time when the tech titan is pitching Chrome OS as an operating system for enterprises.

The obvious comparison here is to Microsoft’s Surface tablet line, which helped revitalize the PC business by driving the creation of laptop-tablet hybrids. If Google can do the same thing for the Chromebook market, that could have some fairly significant consequences.

This is the most expensive Chromebook available on the market (starting at $999), and it seems like the best one money can buy. The hardware shines (literally — the glass inlays on the case are slightly reflective), but its software still feels hampered and not fully ready for the Pixelbook’s marquee touchscreen.

And then there’s the issue of Chrome OS itself. While the operating system has grown a lot, it still doesn’t have all the apps and services that a user might want, which might dissuade someone before they even get their hands on a Pixelbook.

The bottom line is this: If the concept of the best Chromebook on the market is appealing to you, you’ll appreciate this hardware. Everyone else will have to wade through the muddier nuances of the Pixelbook’s challenges. Read on.

The Pixelbook’s physical chassis screams attention to detail. Case in point: A pair of silicone pads on either side of the trackpad are designed to act as a cushion for the touchscreen and keep it off the Pixelbook’s keyboard, as well as acting as feet that keep the device from sliding around in tablet mode.

(There’s a matching silicone strip on the back that helps anchor the device when it’s set up as a laptop.)

Google’s keyboard seems like it will prove divisive. It’s incredibly quiet, but it feels just a tad mushy compared to a mechanical offering or even Apple’s most recent laptop keyboards. An average user likely won’t find much to complain about with it, but keyboard fanatics might take issue.

As soon as the computer senses that it has been folded completely flat, the system stops accepting inputs from the keyboard in order to minimize errant keystrokes when the Pixelbook is being used in tablet mode.

That same level of attention to detail is evident in the snappy Pixelbook touchscreen. Google put a lot of work into reducing the latency of touch events, so people can see the results of what they touch in as close to real time as possible. All of that work paid off.

As for the hinge that lets users flip the Pixelbook around, it feels just right: firm without feeling too tight or too loose. Now, this is only a couple of weeks after getting the device, so it’s hard to know how it will change over time.

Overall, the Pixelbook feels pretty great from the standpoint of a solid gadget. But then there’s the software.

If there’s one thing that using a Surface Pro 3 for several years taught me, it’s that a touch device relies upon a number of affordances to bridge the gap between how people touch the screen and what the user interface actually opts to do.

But Chrome OS misses some of the affordances available in Windows 10, or even in Android. For example, closing Android apps in tablet mode requires tapping on an icon in the status bar and tapping the Close button in a contextual menu that’s clearly built for use with a more precise mouse pointer.

Browsing YouTube through touch alone is similarly frustrating. Tapping any section of the video player that includes a clickable button or slider will automatically trigger that function. For example, tapping the lower-right hand corner of a video will automatically put it into full screen mode, even if all you wanted to do was see how much time is left in a video.

While the screen will change orientation based on the position of the Pixelbook, I found it to be a bit inconsistent, especially when I tried to stand the laptop up easel-style, with its screen flipped around. The volume switch on the side of the device doesn’t change orientation with the screen, which puts you in the odd position of occasionally pressing the button that faces up relative to the on-screen content in order to turn the volume down.

Although users can download and run Android apps alongside content in Chrome now, that doesn’t always feel like a complete experience, depending on how much effort developers have put into ensuring that their app is compatible with Chrome OS. On the bright side, users have a wide variety of applications to choose from, but a comparatively small handful of them are optimized to work with a Chromebook, especially one in laptop mode.

Google did its best to make that experience feel better, but the company is still relying on developers updating their applications to embrace Chrome OS. It’s something the company is working hard on, but one of the pains of being an early adopter is not being able to access a wide breadth of Android apps that are built to work with the new hardware.

These are largely small annoyances, but they add up to an experience that feels a bit hacky and incomplete, in stark contrast to the refined aesthetics of the hardware. A computer this good-looking and well thought out from a hardware engineering perspective should have software to match, and the current state of Chrome OS doesn’t quite live up to that promise.

The Pixelbook comes with plenty of bells and whistles, like an integrated Google Assistant that can answer written and spoken questions, as well as providing users with information about a screen area they highlighted using the Pixelbook pen. Those are nice features, but I don’t exactly see myself relying on them on a regular basis. (I rarely use Siri or Cortana on their respective desktop operating systems, for example.)

Still, it’s cool to see, and the Assistant integration in particular means that Google’s virtual assistant is now better poised to compete with the likes of Siri and Cortana as companies race to make their AI conversation partners available in as many settings as possible.

Needless to say, I’m not going to run out and drop $1,000 or more on a Pixelbook at launch. And folks who feel like they’d be hampered by the software frustrations that bug me are likely going to be better off holding onto their money.

At the same time, Chrome OS stalwarts, like those who grew up using the software in school, will likely find this whole package a strict upgrade over their previous hardware, with some additional bells and whistles included. That’s one of the key things Google has going for it: a user base that grew up with Chrome OS and is now ready to pick up more performant (and pricier) hardware.

The company clearly plans to keep investing in the desktop operating space, so it’ll be interesting to see what comes next as the Pixelbook plays out in the market.