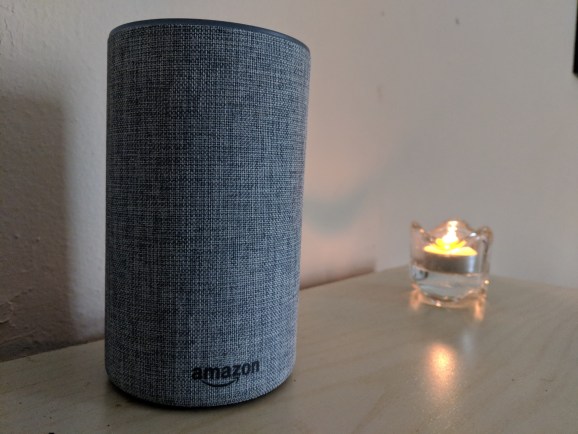 Amazon’s Alexa has gained the ability to respond to custom phrases, schedule actions by smart home appliance, and give you a rundown of the weather, traffic, or news. These features come courtesy of Alexa Routines, which first began to roll out to Echo device users a few days ago, an Amazon spokesperson told VentureBeat. Customizable voice commands and routines can be made with the new Routines tab in the Alexa app for Android and iOS.

In addition to making Alexa respond to customizable phrases, Routines can also be used to schedule actions to occur daily, weekly, or on weekends. This is the first time Alexa is able to take scheduled actions, an Amazon spokesperson told VentureBeat.

You create a new routine by picking a phrase that begins with “Alexa” and then choosing an action you’d like to have happen whenever you say that phrase. The most obvious routines to establish are for phrases like “Alexa, I’m home” or “Alexa, I’m heading out,” through integrations with smart home devices like plugs, remote controls, locks, and lightbulbs from companies like Philips, August, TP Link, and Belkin. Routines that tap devices like Logitech Harmony Hub and its accompanying remote control will be able to turn on music or specific programming on a TV through Harmony activities, an Amazon spokesperson told VentureBeat.

Routines can be carried out through multiple devices, like the Echo or Echo Show, as well as through pre-existing groups of smart home devices configurable in the Alexa app.

With the exception of smart home integrations, Routines available today are a lot like the My Day feature that has been available for Google Assistant for more than a year. If you ask Google Assistant to “Tell me about My Day,” it will read you news and weather and give you reminders and information about your next meeting or your commute.

At an event to debut Pixel 2 smartphones and other hardware earlier this month, Google said its Assistant will soon be able to carry out multiple tasks at once. For example, saying “OK Google, let’s go home” will prompt it to give you directions, reminders, and resume your podcast.

An Amazon spokesperson declined to respond to questions about new features that may be added for more powerful Alexa Routines in the future or share how Routines will interact with the more than 20,000 third-party Alexa skills.

It’s easy to gather that Routines may someday come to include things like your reminders, calendar, shopping list, latest messages, subscription Alexa skills, and other things Alexa can connect you to today.

Preset phrases that achieve multiple tasks are relatively new for many intelligent assistants, but some are able to accomplish similar tasks. Apple’s HomeKit allows Siri users to group smart home devices for commands like “Good morning” or “I’m home,” but it does not (yet) offer options for Siri interaction. Customizable settings have been part of Samsung’s Bixby since it first became available in the United States this summer.

Though Alexa Routines can really change the way you interact with an Echo device, there are limitations. Routines related to traffic updates do not appear capable of taking your current location into account. Google’s “I’m heading home” is expected to take location into account, as are reminders from Microsoft’s AI assistant Cortana.

Routines currently only work with a handful of smart home products, which do not include a broad variety of devices, such as sprinkler systems, iRobot vacuums, and others that can be controlled with Alexa voice commands. Routines also cannot be used to unlock doors.

This isn’t the first time Alexa is able to incorporate custom commands.

IFTTT can make connections called applets between Alexa and hundreds of services, so you can say things like “Alexa, tell the office I’m heading home” to send colleagues a message on Slack that you’re on your way home. It can also do things like sync your Alexa to-do list with your Google calendar. The ability to control multiple Alexa devices with smart home Scenes has been available since last fall.