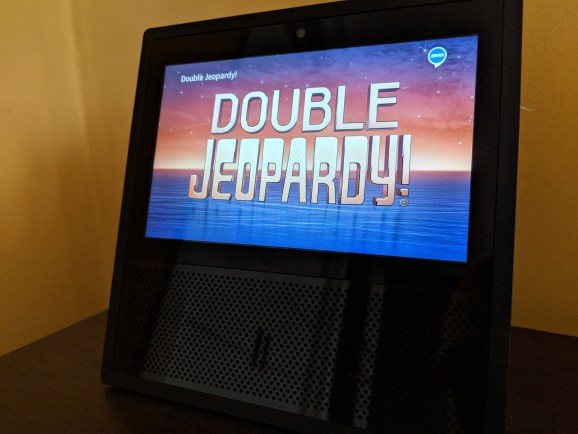 Bringing two of its major offerings together for the first time, Amazon has announced that all Prime members with an Alexa-enabled device now get up to six additional questions when they play Jeopardy on weekdays. Everyone can play Jeopardy and get six new questions a day for free, but Double Jeopardy is only free for Prime members.

Echo device owners who don’t have Prime memberships but want to play Double Jeopardy must pay $2 a month, making Jeopardy the first skill with a paid subscription fee. It also marks the first time Amazon has used an Alexa skill to offer an exclusive benefit to Amazon Prime members, a company spokesperson told VentureBeat. Amazon now has more than 80 million Prime members.

Subscription skills will be made available to more third-party developers at a later date.

“We believe monetization models like subscriptions will bring more premium content to customers and give developers a way to build a voice-first business,”  Amazon Alexa director David Uffelman told VentureBeat in an email. “We anticipate a variety of different skills using subscriptions, and we’re excited to see what developers will bring to our customers.”

Jeopardy has been available since last year, and Double Jeopardy was made available for the first time Tuesday. Subscriptions can be ordered directly through the Jeopardy skill and canceled anytime with the Alexa app, a company spokesperson told VentureBeat. Users of the skill who just want six Jeopardy questions a day can continue using it for free.

Without question, Jeopardy has been one of the most popular of the more than 20,000 Alexa skills available and has been consistently listed among top skills in the Alexa Skills Store. When Jeopardy is played using a device with a screen like the Echo Show, a portion of the show theme song plays, host Alex Trebek welcomes you, and clues are presented with the same blue background and white letters you see on TV. Alexa ultimately reads the questions, though.

A paid subscription model would give developers making voice apps for Alexa an additional way to make money. In a program that began earlier this year and was expanded this summer, Amazon now pays Alexa skills developers based on the level of engagement their skill generates among Alexa users.

The Alexa team has increasingly made games a selling point for the intelligent assistant. Last week, Sensible Object, a graduate of the Alexa Accelerator, debuted the first of six Alexa-based games for $25. Echo Buttons and the Gadgets API also made their debuts recently to encourage more developers to make more games.

The extra Jeopardy questions on weekdays is one of Amazon’s latest initiatives to encourage Prime membership. Other benefits made available this year include reduced membership prices for students and people on government assistance, order fulfillment in two minutes or less at lockers near college campuses, and Wardrobe, a service that offers discounts on clothes for Prime members and lets you send back items you don’t want at no extra cost. Prime members are also expected to receive discounts when shopping at Whole Foods, the supermarket with more than 400 locations across the United States that Amazon acquired for $13.7 billion earlier this year.

Prime benefits continue to roll out as the service becomes available to Amazon customers outside the United States. CFO Brian Olsavsky said during quarterly earnings in July that this initiative has driven higher costs for the online retail giant. Though no specifics were offered, the company said this year’s Prime Day yielded 60 percent more revenue than Prime Day in 2016.