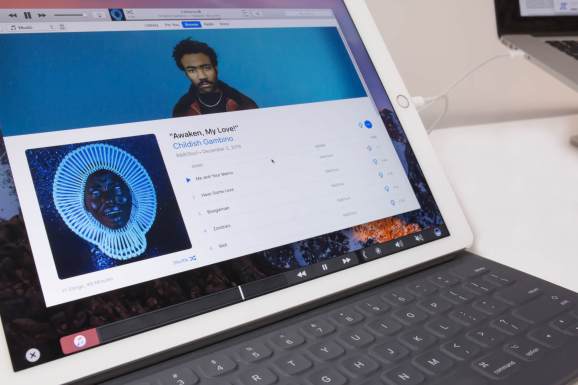 Duet runs a virtual version of Apple's Touch Bar on an iPad Pro that's connected to a Mac.

Last quarter was typical: smartphones up, tablets down. The tablet market has now declined every quarter over the past three years. Q3 2017 saw a 5.4 percent year-over-year decline: 40.0 million units shipped worldwide, compared to 42.3 million units in the same quarter last year. The only silver lining is that the 2017 drops aren’t in the double-digits, like they were in 2016.

The estimates come from IDC, which counts both slate form factors and detachables, meaning tablets with keyboards included. The top three tablet makers maintained their positions: Apple first, Samsung second, and Amazon third. And the top five vendors accounted for 66.7 percent of the market, up from 57.2 percent last year:

Apple saw its shipment numbers grow for the second quarter in a row (following a 13-quarter losing streak), gaining 3.9 percentage points in market share as a result. IDC explains that the company pulled off the turnaround thanks to its lower-priced iPad, though it is still facing competition from various PC and mobile vendors.

Samsung shipped fewer tablets than in the quarter a year ago and ended up losing 0.4 percentage points. Detachable tablets accounted for less than 10 percent of the company’s shipments in the quarter, making it rely heavily on the lower-cost Tab A and E series, which could be a problem in the long-term. In Q2 and Q3, the South Korean company lost ground to its American competitor, which is the opposite of what happened on the smartphone side.

Amazon shipped 1.3 million more tablets, gaining 3.4 percentage points. Its low-cost hardware push is working, although who knows for how long — the 7-inch tablet offered for under $30 during its Prime Day Sale was likely key.

Huawei and Lenovo both shipped more units, with the former catching up to the latter. Tied for fourth place at 3 million units each, they’re both still in the game.

The same tablet trends continued through this past quarter. The replacement cycle for tablets is still closer to that of traditional PCs than smartphones, and first-time buyers are rare. Consumers are mainly interested in cheap tablets, if at all.

“There’s a penchant for low-cost slates, and this holds true even for premium vendors like Apple,” IDC research analyst Jitesh Ubrani said in a statement. “However, many of these low-cost slates are simply long-awaited replacements for consumers, as first-time buyers are becoming harder to find and the overall installed base for these devices declines further in the coming years.”