It’s no secret that AI is being applied to virtually everything, but this was a big week for enterprise conversational AI. Salesforce’s Einstein debuted a platform for businesses to deploy bots on apps and websites, Facebook Messenger is coming to the web, and Microsoft Word now has a Resume Assistant imbued with intelligence from LinkedIn.

Even will.i.am from the Black Eyed Peas has entered the enterprise AI assistant marketplace, following a recent commitment by Cisco to launch an AI assistant dedicated to speaking up in team meetings.

It’s pretty exciting to see Microsoft begin to incorporate insights from LinkedIn into products like Cortana and Microsoft Word. Using AI to determine the best job title to put on a resume can be powerful, as Indeed demonstrated last month at VB Summit, but the most intriguing part of the assistant may be its ability to surface good examples of work experience derived from LinkedIn public profiles written by humans.

Salesforce’s bots can be configured to only operate when a business is closed, and if the bot lacks confidence in its answer to a question or a high-value lead lands on your website, the conversation can be routed to an experienced (human) customer service agent.

On the same day that Facebook’s protocol for the transfer of conversations from bots to humans became available worldwide, Messenger announced a plugin to bring chat to any website — for conversations with both humans and bots.

Machines are getting smarter, but it’s the augmentation of human and machine intelligence that makes these assistants especially useful, both for businesses and prospective employees writing resumes.

P.S. Please enjoy this video: The Future of Artificial Intelligence 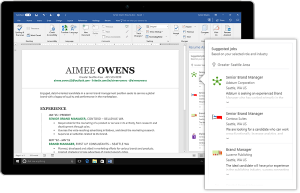 Above: An illustration shows how Resumé Assistant suggests jobs for people based on their work experience.

Microsoft is debuting a new feature for Office 365 subscribers today that’s designed to help job hunters construct sublime resumes. The new Resume Assistant is baked directly into Microsoft Word and will automatically kick in when it identifies a document a user opened as a resume. It will serve up examples of […] 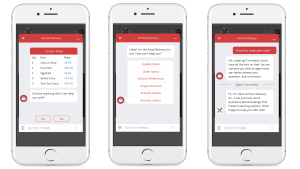 Salesforce announced plans today to bring automated bots to its Einstein AI platform. The bots, which can include conversational AI for natural language interactions, will be deployed on apps and websites to give businesses the ability to deliver services to customers. “Initially, Einstein bots can be deployed on websites and in mobile apps via our Live Agent chat solution. In the future, Einstein bots […] 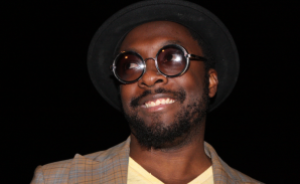 I.am+, the tech startup founded by pop star and entrepreneur will.i.am, has raised $117 million in venture funding, the company told Reuters on Monday as it announced its entry into the corporate computing market with a voice assistant for customer service. The company, founded in 2012, initially focused on consumer electronics devices such as headphones. The new artificial intelligence product, similar to Apple’s Siri and […] 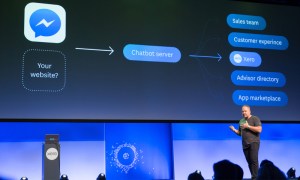 Facebook Messenger now has a plugin that lets visitors to a website engage in live chat with a human or bot without leaving that website. Called Customer Chat, the plugin is one in a series of major changes announced today as part of the release of version 2.2 of the Messenger Platform. The announcement was made by Messenger head of product Stan Chudnovsky on stage at Web Summit in Lisbon, Portugal. Things like Message Us buttons or a Send to Messenger plugin have been available for websites for a long time, but this […] 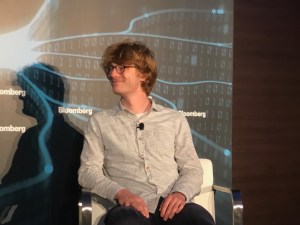 Above: Richard Socher, Salesforce’s chief scientist, speaks at a Bloomberg event in San Francisco on June 22, 2017.

Salesforce shows how to bypass a key bottleneck in AI translation

Salesforce Research unveiled a new technique today that’s supposed to speed up machine translation using AI by doing away with one of the historical limitations of those systems. Instead of translating word by word, the system will now generate whole sentences at once. The approach massively accelerates the process of machine translation compared to […]

Building AI that can build AI

They are a dream of researchers but perhaps a nightmare for highly skilled computer programmers: artificially intelligent machines that can build other artificially intelligent machines. With recent speeches in both Silicon Valley and China, Jeff Dean, one of Google’s leading engineers, spotlighted a Google project called AutoML. (via New York Times)

On a sandy peninsula in northwest Saudi Arabia, the only interruption to miles of desert was the wreck of a Catalina seaplane, abandoned by its American pilot in 1960 and now covered in Arabic graffiti. But it’s here that Saudi Arabia’s crown prince plans Neom, a city from scratch that will be bigger than Dubai and have more robots than humans. (via Bloomberg)

Artificial intelligence is putting ultrasound in your phone

If Jonathan Rothberg has a superpower, it’s cramming million-dollar, mainframe-sized machines onto single semiconductor circuit boards. The entrepreneurial engineer got famous (and rich) inventing the world’s first DNA sequencer on a chip. And he’s spent the last eight years sinking that expertise (and sizeable startup capital) into a new venture: making your smartphone screen a window into the human body. (via Wired)

Andrew Ng, formerly the head of AI for Chinese search giant Baidu and, before that, creator of Google’s deep-learning Brain project, knows as well as anyone that artificial intelligence is coming for plenty of jobs. And many of us don’t even know it.