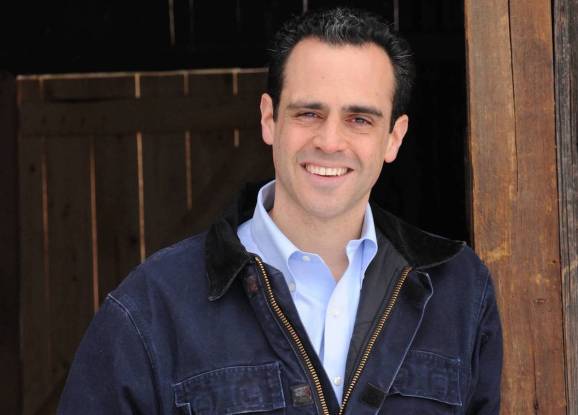 Matt Dunne, founder and executive director for the Center on Rural Innovation

It’s no secret that while Silicon Valley is gaining jobs, rural America is losing them. A September report from the Economic Innovation Group found that nearly 90 percent of the ZIP codes in the U.S. that qualify as “economically distressed” have fewer than 50,000 people.

There have been a number of publicized efforts this year from the big five tech companies — Amazon, Apple, Facebook, Microsoft, and Alphabet — to create more tech jobs in places outside of Silicon Valley. But many of them are tailored to metropolitan and suburban communities. An office that needs up to 50,000 employees isn’t going to open in a town of 15,000.

Matt Dunne, Google’s head of community affairs from 2008 to 2016, says that there’s more opportunities for Silicon Valley and rural communities to work together than they might initially think. He’s proof — while at Google, he ran the company’s Community Affairs team from the tiny village of White River Junction, Vermont.

Following the 2016 election, Dunne launched the Center on Rural Innovation (CORI), an organization that seeks to create a scalable model for rural economic development. Earlier this year, the organization received a seed grant from LinkedIn cofounder Reid Hoffman, whom Dunne has known for nearly two decades.

Creating a network across rural America

Currently, CORI is conducting a pilot program in an undisclosed town of just under 10,000 people in Vermont. CORI is operating as a project of a Vermont nonprofit, the Sustainable Food Lab, while it waits to secure its 501(c)(3) status. Besides Dunne, CORI’s team includes managing directors Tom Elliott, the founder of Idea Greenhouse, a coworking community in New Hampshire, and Lee Rom, the former COO of consulting firm Dalberg.

CORI’s plan is to build a network of “innovation hubs” across rural America. Each innovation hub would contain a coworking space for entrepreneurs and remote workers, loft apartments, and restaurants, shops, or other cultural establishments. Additionally, they will come equipped with fast, reliable broadband, and will offer workforce training and mentorship programs.

For now, CORI is looking at non-suburban communities with a population between 8,000 and 25,000 that have assets that will make them more likely to succeed — a nearby university, or reliable broadband that’s already been installed thanks to a state grant program.

The goal, Dunne says, is to encourage more entrepreneurship in rural towns, and make more opportunities for remote work available to job seekers located there. According to data from the Kauffman Foundation, the percent of startups located in rural communities has declined from 20 percent in the 1980s to 12.2 percent in 2016 (PDF). And while rural areas typically have a higher percentage of self-employed workers than in urban or suburban areas, that number has declined from nearly a 9 percent high in 1995 to just above 6 percent in 2015.

“When a company leaves, it causes a disruption as it anywhere, but when you have fewer and fewer business starts, that means there are fewer and fewer options and communities lose resiliency,” Dunne told VentureBeat in a phone interview.

CORI isn’t the first organization to bet on innovation centers as a way to transform a community. However, its strategy is unique in two respects — first, in that CORI is trying to develop a scalable model for assisting small-town entrepreneurs.

One of the obvious challenges that rural towns face is the lack of population density, which can make building a professional network difficult for entrepreneurs and freelancers. “You just don’t have half a dozen entrepreneurs down the block from you, and lawyers that work with small businesses all the time, or design firms around the corner in rural communities,” Deb Markley, the cofounder and managing director of the nonprofit Center for Rural Entrepreneurship, told VentureBeat.

To tackle this, a Vermont entrepreneur could turn to CORI for help in finding a qualified developer to hire or an angel investor, for example.

Second, Dunne is betting that his team’s connections with national organizations will help more rural workers find remote work. He says that around a dozen companies — ranging from startups to Fortune 500 companies have already expressed interest in working with CORI.

In theory, working remotely is easier than ever before, thanks to the abundance of broadband and enterprise communication tools. While many rural workers already have the necessary digital tools to work remotely, not all of them do —  63 percent of rural adults have home broadband, for example, compared to 73 percent of all U.S. adults. And many Silicon Valley companies, with an affinity for corporate campuses, are still hesitant to hire remote workers at scale.

“Rather than placing it as ‘come work in a rural community,’ I think [tech companies] have to set a ‘work where you want to work’ policy,” Brent Comstock, the founder of BCom Solutions, a digital marketing company headquartered in Auburn, Nebraska (population 2,399), told VentureBeat.

Dunne emphasizes that CORI isn’t planning on turning every worker in rural America into a developer, and that many of these workers already have the skills needed to fill a variety of roles at tech companies — from customer service to graphic design to bookkeeping. They just need someone who can help them get their foot in the door of larger companies.

“Just because there are distance work jobs out there doesn’t mean that people necessarily know that they are available,” Dunne said.

Dunne declined to say how much CORI estimates each innovation center will cost, saying that the cost will ultimately depend on how CORI’s pilot programs fare. He also added that he envisions setting a membership fee for the innovation centers, or charging companies to hire from CORI as potential revenue streams later down the line.

Dunne, 48, stumps for the digital economy in a decidedly low-tech place: his family’s farm in Hartland, Vermont (population 3,393), where he’s lived and worked for most of his career. After graduating from Brown University in 1992, Dunne returned to his home state to run for state representative as a Democrat and won, becoming a politician at the age of 22.

Over the next 14 years — taking a break from local politics for two years to direct AmeriCorps VISTA under President Bill Clinton — Dunne served as both a state senator and state representative. Some of the legislation he cosponsored included a state-funded seed capital fund and broadband grant program.

“When I worked with him, Matt was and still is the bridge between tech and rural America,” Hinda Miller, a Democratic Vermont state senator from 2003 to 2012, told VentureBeat.

Thanks to his early start, Dunne is a well-known figure in Vermont politics, but his ideas have failed to captivate on a larger scale — he’s made two unsuccessful runs for governor of Vermont, once in 2010, and once in 2016.

In 2007, Andrew McLaughlin, then Google’s director of global public policy, recruited Dunne to do some consulting work for the company, as Google was looking for new towns to place its enormous data centers.

At the time, Google had only two data centers in the U.S. — one in Georgia and one in Oregon — but had recently unveiled plans to open four more in North Carolina, Iowa, Oklahoma, and South Carolina.

“What we realized was we were just completely out of our depth when dealing with local community leaders, and understanding local power structure,” McLaughlin said in a phone interview.

In 2008, Dunne joined Google full-time as its head of community affairs — a job that he insisted on doing from Vermont. His job was to identify ways that Google could be a “good corporate citizen” in towns where Google had data centers, and later led the rollout of Google Fiber.

Some of the outreach efforts Dunne organized included a “come on home” recruiting campaign in Lenoir, North Carolina aimed at former residents who had left for better job opportunities, and website tutorials for local business owners.

“What was exciting was not that the data centers were solving all of the rural communities’ problems — because they weren’t — but that my team was given the ability to try different things,” Dunne said.

Dunne knows that his model can’t work in every rural town — which is why CORI is looking at communities that already have assets that make them more likely to succeed, like broadband or a higher population. And he says that the innovation center is meant to be a “starting point” to identify opportunities for economic growth in other sectors besides tech, such as renewable energy or agriculture.

But the innovation centers that CORI is proposing are very much bundled with infrastructure typically associated with buzzy tech ecosystems — loft apartments and coworking spaces — which might not be the biggest priorities for all rural entrepreneurs and freelancers.

“I think one of the things that rural places tend to get wrong is to assume that if this works someplace else, it will work here,” Markley said, citing Athens, Ohio, as an example. According to Markley, the town of 25,000 was set to launch a more traditional business incubator, before business leaders stepped in and said that what the agriculture-heavy community really needed was a shared commercial kitchen and other resources for food entrepreneurs.

However, for a glimpse at what a CORI town might look like in the next in 20 years if Dunne and his team are successful, there’s White River Junction, Vermont. Located 10 miles from Dunne’s hometown of Hartland, White River Junction is one of five unincorporated villages that make up the town of Hartford, Vermont, which has a population of just under 10,000.

A former railroad hub, White River Junction has reinvented itself as a center for the arts, thanks to a few key players, including Dunne. While serving as a state representative, he launched a festival in White River Junction celebrating the village’s railroad days, as well as a youth summer theater program.

White River Junction is home to one of the lowest unemployment rates in the state, at 2.3 percent — and the community does have an advantage in that it is located just five miles from Dartmouth College.

Some of the most well-known hubs for artistic activity in White River Junction include Northern Stage, a regional theater company founded in 1997; the Center for Cartoon Studies, a nonprofit, accredited institution founded in 2004 that offers a two-year masters in fine arts degree; and the Tip Top Media building, a former bread factory that now houses a number of startups and local businesses. Tip Top Media served as Dunne’s offices when he worked for Google — and seems to closely resemble the vision Dunne has for CORI’s innovation hubs.

White River Junction may not be a prominent tech hub — but what it does have is economic diversity.

“Rural economies are not going to be solved simply by having an innovation center in one building — it’s about maximizing the potential of the workforce,” Dunne said.

Update, 2:49 p.m. An earlier version of this post misidentified the type of property Dunne’s family owns in Hartland.