Microsoft-owned mobile keyboard app SwiftKey is rolling out a new feature today that lets users personalize their keyboard using their own photos.

Starting today on Android and iOS in beta, SwiftKey users can upload any image to use as the backdrop for their keyboard. The company is also revealing a new partnership with photographer Keith Ladzinski, who specializes in adventure photography and who has provided 12 of his own images for use within SwiftKey. 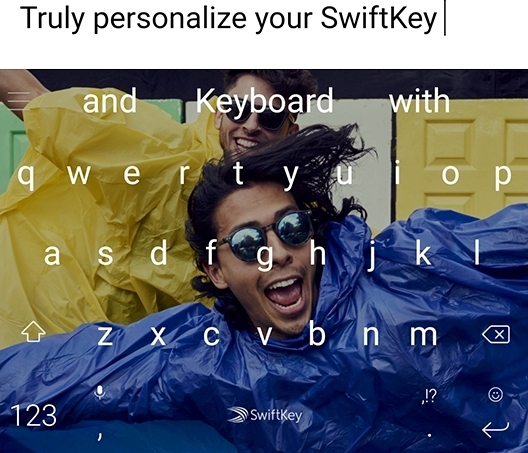 SwiftKey already allows users to tailor their keyboard with themes that include plain colors and snazzier incarnations, but this latest personalization feature lets them put anything from their cat to their toddler on their keyboard — the most commonly used app on most people’s smartphones.

“SwiftKey Keyboard has always been about giving users ways to make the technology even more uniquely theirs — whether that’s in the language they use, how they type, or what their personal keyboard looks like,” noted SwiftKey cofounder and CEO Jon Reynolds. “Today’s launch of photo themes marks another way that users can make SwiftKey Keyboard even more their own.”

Founded out of the U.K. in 2008, SwiftKey grew in popularity on Android as a replacement keyboard app for phones and tablets. It learns your writing style over time and even predicts the next word before you’ve started typing it. SwiftKey launched for iOS in late 2014 after Apple opened up to third-party, system-wide keyboards.

In February 2016, Microsoft confirmed that it had acquired SwiftKey, and a few months back the company revealed it was killing off its experimental keyboard app Word Flow on iOS and would be pushing SwiftKey instead.