Buildup, a task management and collaboration platform aimed at the construction industry, has raised $7 million in a Series A round of funding from Tel Aviv-based TLV Partners, UpWest Labs, 01 Ventures, Abstract Ventures, and Check founders Guy Goldstein and Ahikam Kaufman. 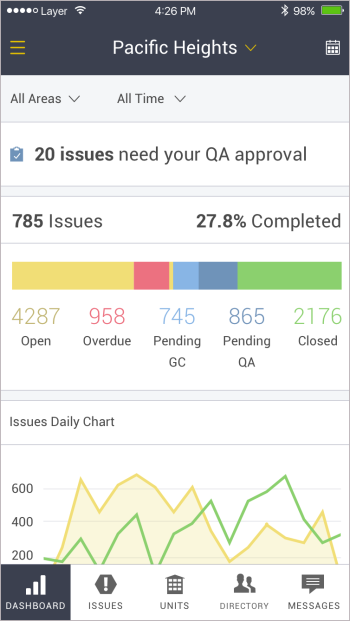 Prior to now, Buildup had raised $1.6 million in seed funding, and with its latest cash influx the company said that it plans to expand its engineering, sales, and marketing teams.

The global construction market is reportedly worth around $10 trillion, but the industry isn’t renowned for its efficiency, with some reports suggesting that the sector is among the lowest in terms of productivity — partly due to its lack of digitization.

“The construction industry lags behind other markets in the overall productivity of its workers,” noted TLV Partners managing partner Eitan Bek. “Buildup addresses the longest phase of a construction project: building. The management team has executed extremely well, with limited resources, and has managed to achieve significant customer adoption in a challenging market.”

And it’s against this backdrop that the tech industry has seen myriad construction-related launches and investments around the world.

Buildup said that it has worked with ENR-ranked top 50 companies such as Turner Construction, Whiting Turner, AvalonBay, and Greystar, among others.

“Our customers have used Buildup to make job sites more efficient and collaborative, while also gaining newfound insight into critical and timely data during the execution stage of construction projects, when most of their budget is spent,” added Buildup CEO and cofounder Oren Cohen.