Today, eBay released an updated version of its Google Assistant app that lets users start a conversation about an item they want to buy on a smart speaker and then continue the shopping experience on an Android or iOS smartphone.

Say: “Hey Google, ask eBay to find me a — ,” followed by the name of virtually any item, and the eBay voice app will ask questions to narrow your search before pulling up results. Once you find an item that’s to your liking, the app will ask if it can send the results to your phone.

The eBay app is one of the first Google Assistant voice apps to take advantage of the new feature Google calls multi-surface switching. Earlier this month, Google rolled out a series of changes — including multi-surface switching — to better equip developers with tools to make voice apps for the millions of devices that can speak with Google Assistant.

Like every other experience driven by conversational AI, the eBay voice app still makes mistakes, but it also has the power to drill down well beyond your initial query. For example, before delivering an answer to a search for wireless headphones, the eBay app may ask if you want headphones from Apple, Sony, or another brand, whether you want in-ear or over-the-ear headphones, and which color you prefer.

The multi-surface shopping experience with Google Assistant appears to be limited to Google’s voice apps today, but such a feature could one day be used for shopping through other visual interfaces, like Chromecast or someday tablets using the Android operating system. Multi-surface shopping could also change Google Express, which is Google’s answer to Amazon’s massive marketplace.

Google Assistant can make Google Express shopping recommendations today but only with a Home smart speaker.

Say “OK Google, order towels” to a Google Home smart speaker today and you may receive recommendations from Walmart and Bed, Bath, and Beyond. Tell Pixel Buds or an Android smartphone with Google Assistant to “order paper towels” and, ironically, you’ll get a web search with Amazon.com as the top result. 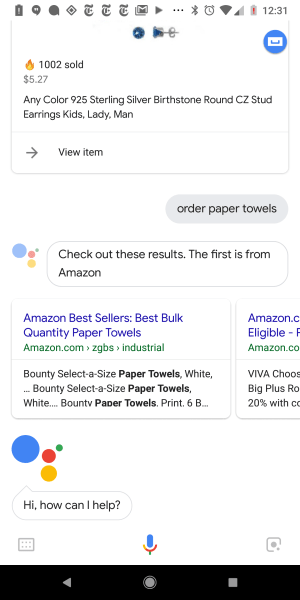 Since Google Express shopping with a Google Home smart speaker became available earlier this year, Google Express has come to include some of the largest retailers in the United States, including Home Depot, Target, and Costco. Powering discovery via natural language for retail giants sounds like a daunting, but potentially lucrative, challenge.

Updated 12:51 p.m. to include an example of a Google Express search result and the screenshot of an “order paper towels” query with Google Assistant from a Pixel 2 smartphone.