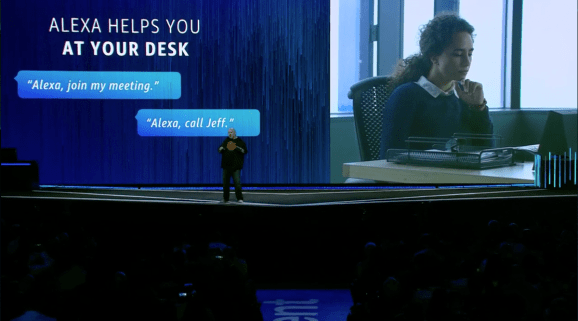 Amazon is bringing its AI assistant to the workplace with a new service called Alexa for Business. The news was announced today by Amazon CTO Werner Vogels onstage during the keynote address at the AWS re:Invent conference being held this week in Las Vegas.

Alexa for Business will be able to place meeting calls with Cisco, Polycom, Zoom, and other communication companies that can respond when you say “Alexa, join my meeting.” The platform will also include Salesforce to answer questions about business performance, Concur to share business travel itinerary information, RingCentral for voicemail readings, SAP SuccessFactors for HR, and other third-party voice services for the enterprise.

A series of features added to Alexa this year make the AI assistant better equipped to enter the workplace, including the ability to make phone and video calls, plus the incorporation of calendars from Office 365 and Google’s G Suite.

The expansion is also likely to put to use AI services announced Wednesday like AWS Transcribe, AWS Comprehend, and Rekognition Video.

Workplace administrators will be able to configure what happens each time an employee says “Alexa, start the meeting” and which specific skills are enabled in meeting rooms. Businesses are also invited to make their own private Alexa skills. Unlike groups of Alexa-enabled devices at home, Alexa for Business customers will be able to control 25 devices at once, according to an AWS blog post, with things like skills groups and room profiles.

Developers can make Alexa for Business skills for control smart devices, flash briefings, and  internal company use with the Alexa Skills Kit.

Amazon joins a series of productivity and enterprise companies with plans to enter the battle to become the AI assistant for the workplace.

Cortana VP Andrew Shuman told VentureBeat Microsoft is working on enterprise skills and LinkedIn integrations, while Cisco wants to make Cisco Spark Assistant the AI assistant for meetings by leveraging its hundreds of thousands of endpoints already in meeting rooms around the world. Amazon doesn’t have the existing history or footprint of other companies like Cisco in meeting rooms, but the coworking chain WeWork plans to place an Echo device in each of its meeting rooms.

It will be interesting to see if Amazon and Microsoft’s partnership to grant access to each other’s assistants will extend to the workplace. Conversations about the partnership this summer centered around the idea that AI assistants will become known as especially good at certain tasks.

This is not Alexa’s first venture into the workplace. Existing skills like VoiceMyBot connect with HipChat and a smart light bulb to tell sales teams when they’re meeting or missing goals, while skills made by companies like Teem have used Alexa for scheduling office meeting since earlier this year. Still others have been able to use Alexa Voice Services to place the AI assistant inside hardware in the workplace.

The home has been Alexa’s central focus since the first black Echo speakers began to sell more than two years ago. A new generation of Echo speakers, for example, were debuted in a home setting this fall at Amazon headquarters.

Amazon’s interest in the enterprise comes as Alexa begins to expand beyond the U.S. to places like India, Japan, and Australia, Canada, and New Zealand in the months ahead.

Beyond the home, Amazon has also expressed interest in expansion to areas like hotels and retail locations, Alexa Fund director Paul Bernard told VentureBeat in an email interview earlier this week. Amazon plans to pour another $100 million into its venture capital arm for investment in startups using Alexa into their products.

Making AI assistants available everywhere you are — from the workplace to your home to your car — is part of ongoing competition between tech giants to showcase and sell their AI services, and to facilitate commerce like shopping or in-skill payments.