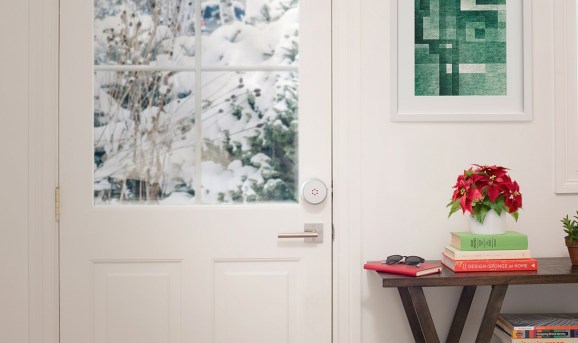 Stockholm-based Assa Abloy was founded in 1994 and is among the world’s biggest lock manufacturers by revenue, with around $8 billion in sales last year and 47,000 employees. It’s also home to a bunch of other brands you’ll no doubt have heard of, such as Yale Intruder Security.

August, for its part, was founded in 2013 and is known for its video doorbells and smart locks that can be retro-fitted to existing locks and controlled via a smartphone. It also offers the August Access program to enable delivery companies to drop goods off inside your home while you’re out. The startup had raised around $75 million in funding, including a $25 million round just a few months ago, and claims around 90 employees.

Above: August lock in action

So what does the future hold for August? And what exactly will this acquisition enable Assa Abloy to do? We caught up with both companies to get the lowdown on where things are at and where the tie-up will go from here.

What now for August?

The August brand will continue as is, though it will carry a “soft endorsement of being an Assa Abloy Group brand,” Thanasis Molokotos, EVP and head of Americas at Assa Abloy, told VentureBeat.

Elsewhere, all August employees will continue working for the subsidiary, including senior management, which means cofounder and CEO Jason Johnson is staying in his position. According to Johnson, little will change at August on a day-to-day basis, with Assa Abloy essentially serving as an investor.

“August will continue to operate independently,” Johnson told VentureBeat. “Day-to-day, we don’t anticipate a noticeable shift. Over the years, Assa Abloy has welcomed an additional 300 companies and has a history of letting companies operate with little intervention. What it ultimately means is that we have one investor rather than multiple that we will now report to about the business.”

In terms of how the acquisition came about, well, it all started when August invited Assa Abloy to participate in the August Access program, which was launched back in 2015 to make it easier to give third parties, such as Postmates, access to your house. Back in September, August announced a deal with Walmart and Deliv to enable groceries and packages to be delivered directly into your home — and inside your fridge. It seems that Assa Abloy was suitably impressed with the product.

“As we learned more about August, we became aware of the complementary strengths they had relative to Yale, which is also an active player in the connected home,” said Molokotos.

Smart locks are still an early-stage market, however — most people continue to use good old-fashioned locks and keys to access their humble abodes. Estimates for the future growth of smart locks vary wildly, but a recent MarketsandMarkets report indicates that the space will grow from around $1.28 billion today to $2.67 billion by 2023. A report by Research and Markets from last year pegged the 2024 figure at a whopping $24 billion.

As you’d perhaps expect, both August and Assa Abloy believe smart locks will be huge one day.

“We are committed to making smart home access available to everyone,” said Johnson. “In September, we announced two new smart locks. The August Smart Lock is just $149, which makes this technology accessible to a much broader set of users. And through our partnerships with companies like Walmart, we’re quickly seeing in-home deliveries becoming a reality for the everyday consumer. Ten years from now, how we think about the front door will be completely different. It will no longer be an obstacle to convenience, it will be an enabler.”

The mighty Amazon agrees with that assertion. A couple of months back, the ecommerce giant announced a new in-home delivery service called Amazon Key. For the service, Amazon launched a new product called Amazon Cloud Cam, which is a $120 home security camera. But to open up full access to third parties, such as couriers, customers have to purchase the $250 Amazon Key In-Home Kit, which includes a smart lock from either Assa Abloy-owned Yale or Kwikset.

“August’s primary focus has been on retrofit locks for the DIY market,” said Molokotos. “This is a complimentary area that was appealing to Assa Abloy, since our Yale brand is prevalent in the professionally installed smart lock channels, with complete replacement lock solutions. August Access technology and the recently launched DoorSense technology are also very appealing, and we are fortunate to bring them into the portfolio.”

Indeed, August launched a bunch of next-gen smart locks and home access products a few months back. DoorSense, for the uninitiated, is an integrated sensor that tells the homeowner if their door is open or closed, protecting those who leave the house thinking the door is closed when, in fact, the lock hasn’t engaged properly.

“There’s no question that the August team is very talented and they have created a fantastic customer experience in home access,” continued Molokotos. “While the talent spans across many disciplines, their software capabilities in particular were important to us as a lock company.”

Now that the deal is done, August Access will be integrated into Assa Abloy’s broad range of locks, with retrofitting becoming a core part of the latter’s sales pitch.

“Additionally, our cloud platform allows Yale to expand the capabilities of its locks with powerful integrations,” said Johnson. “Together, we can offer a flexible multi-family dwelling lock solution that uses August or Yale locks and provides value for both residents and property managers.”

It’s worth noting here that being bought out by Assa Abloy gives August instant access to a huge global market. Up until now, August has only shipped its products in North America, though Amazon has helped provide access to additional markets.

“Through Assa Abloy’s investment, we will be able to bring our technology to new audiences, expand internationally, and continue to deliver on our shared vision to make in-home delivery a reality,” added Johnson.