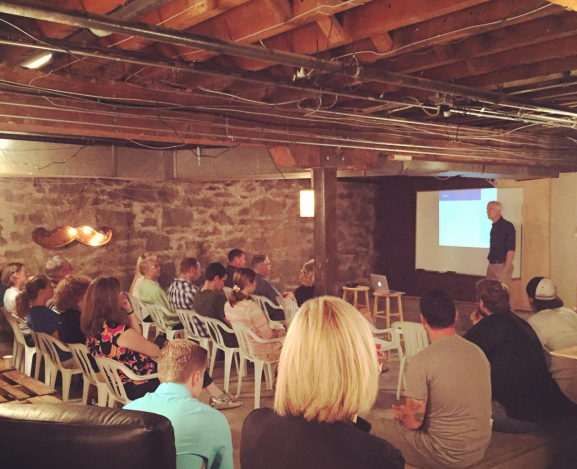 Over the past few years, economic inequality has become a topic of focus for economists, politicians, and leaders of industry. Tech titans are starting to discuss concepts like the future of capitalism, universal basic income, and wealth redistribution as the technology they’ve developed starts to automate more and more jobs.

New York, Los Angeles, San Francisco, and Seattle have seen average wages rise at an unprecedented rate, while smaller towns across middle America have, in many cases, lost jobs and businesses. This has been compounded by a mix of highly skilled talent fleeing to coastal technology hubs, the disruption of traditional industries, and the disintegration of a communal spirit of working towards a brighter future.

This opportunity gap between big cities and small towns has raised the question: Is the U.S. facing economic doom and gloom, or is it on the brink of finding a way to reignite the American dream? At the very heart of America is the thought that everyone is created equal and that Americans can, through their own hard work, be successful. But as more and more jobs become automated through robotics and artificial intelligence, will this hold true?

Many different plans have been proposed as of late. Some call for teaching more citizens to code, others focus on bringing manufacturing back to American soil or creating clusters of research. Would these investments help? Yes. Will they create a path to upward mobility for millions of Americans? No. There is a much more urgent problem that government and economic agencies often overlook: the lack of authentic, inclusive community that is rampant in our nation.

What is authentic, inclusive community? Can it really affect a nation’s economy?

An authentic, inclusive community is one where anyone can on a regular basis meet together, share their story, understand each other’s strengths and weaknesses, and rally around a shared goal whereby they assist each other in turning their dreams into reality. It is a community where groups of people gather outside of industry cliques and paid networking events. All citizens, regardless of their professional background, have an open-door invite to meet up and help each other address their personal and professional goals.

Today in the U.S., the majority of citizens do not have $500 in savings to cover a surprise bill. Loneliness is now considered by many to be an epidemic, and more Americans than ever are suffering from anxiety, stress, and depression. It is safe to say that many humans in the U.S. could hardly be described as “flourishing.”

And if the people of a society are not able to give the best versions of themselves to their work, families, and community, their job performance will suffer. As more and more people find themselves in similar states of existence, companies will face decreased performance. If enough industries are plagued by a lack of excellence in their workforce, an entire nation’s GDP will suffer a blow.

How then can cities begin to build authentic, inclusive communities? I believe they have been focusing on the wrong plans. Government and civic organizations have thrown money at one-size-fits-all solutions. Towns often compete with one another just to convince a large corporation to move to town — a corporation that may very well end up leaving a few years later for another town.

Instead, towns across the nation must now begin the real work of creating a tight-knit community that can work together toward a shared economic goal.

For the past four years, I’ve been quietly developing a model to do just that through the Innovation Collective, an economic transformation agency. The Innovation Collective encourages towns to set up a monthly gathering of neighbors, friends, coworkers, and strangers where they talk with local leaders and entrepreneurs who love their town. You may be tempted to think that there isn’t anyone like that in your town; you would be wrong. The woman who has run the grocery store for 25 years; the man who has owned a car dealership for 15 years; the CEO of the community hospital; the janitor at the local high school: Each of them has inspiring stories to tell, lessons to pass on, and a strong vision for the community they live in.

These events are inclusive: Anyone can come, free of charge, and over free drinks (yes, there is beer and wine at our events) meet other people just like them. Anyone who attends gets to spend time talking with those telling their story. Anyone who comes can share their struggles, ask for help, and even ask for vetting of the startup idea they’ve always dreamed about. From middle school students to retired multi-millionaires, everyone is treated as an equal.

Events like these are vital as they remind us that there is more everyone can give to their community. The Innovation Collective meetings are non-partisan and non-religious and are often hosted in parks, pubs, or local restaurants. Many patrons even provide event specials as they pack their venues with people who will now associate their establishment with feelings of connectedness and community.

Once these strategic gatherings are taking place on a regular basis and there is a genuine, inclusive community being developed, citizens can begin to focus on applying their skills sets to the future of work. Rather than looking for the silver bullet to slay their economic woes, cities and towns can begin to understand how to reassemble themselves into what I call “Inclusive Research and Development Communities.” When a community has rallied around a shared focus within a single technology vertical, they can create a hub of research and development that anyone can participate in. In Coeur d’Alene, Idaho, for example, government officials and citizens settled on making the city a hub for robotics. Students now compete at middle-school science fairs to come up with the best project involving robotics, while the local community colleges have introduced courses in robotics motion control.

In the communities that have employed the Innovation Collective plan, children are sending robots into space, adults are improving their financial habits, startups are being founded by unlikely individuals who have gone on to become celebrated innovators, and overall economies have been reactivated and focused. These communities are becoming powerful engines of inclusive, community-based innovation, talent, and IP.

So my proposal is simple: If you want to lead your community toward an economic reformation, it starts with building community. The Innovation Collective has even written out a free field guide to share what we’ve found that works.

Together, I believe that towns across America can reimagine what it means to offer an inclusive community and equal opportunity.

Nick Smoot has founded and sold three tech companies. Now as the founder of Innovation Collective, a full-stack economic transformation firm, and Mountain Man Ventures, an investment fund focused on companies in “non-traditional” innovation markets, he is focused on redefining how cities participate in the future of work.