Last month I covered what an eventful year 2017 was for the WebVR industry and also dug deeper in distinguishing between the two types of WebVR browsers, namely “WebVR-ready” versus “VR-first” browsers, that are enabling navigation for the immersive web in their own peculiar way. I also offered a look at the WebVR version of JanusVR, the native VR browser that runs on its own language, JML, which points to the notion that HTML was never intended to build 3D worlds.

Bottom line: each of these approaches will have a big impact on how the immersive web unfolds, and it’s ultimately in the hands of early stage users to decide which of them will prevail. What’s clear is that their contrast reflects the inherent differences in the nature of the teams that are driving them — their legacies, backgrounds, and how they see the landscape and the challenges before them — and a closer look at some of the players in the scene will paint a clearer picture on why and how.

On the one hand, we have the WebVR-ready browsers, which are the major browser vendors like Mozilla, Google, Samsung, and Microsoft that support the WebVR standard but can only go so far in compromising their general-purpose platforms to cater to VR users, who otherwise represent only a small fraction of their general user base. Naturally, the priority isn’t on VR-specific features and changes to the UX for that purpose, but on serving the internal needs and requirements of a browser that is primarily anchored to its 2D web legacy.

“The large browser vendors are restricted in making any major changes to the browser core as there are already thousands of users who could be affected by the changes. They have added support for WebVR, true, but is this enough for a great virtual reality experience? We say no.” Bilyana Vacheva, Product Manager Creator Experience at LensVR, a VR-first browser being developed by Bulgaria-based Coherent Labs, told me. “A virtual reality experience is more similar to a video game than to a 2D web – there is a 3D world, 3D object, light, sound, multiple users, etc. It requires a different underlying technology that works in the same way game engines do.”

VR browsing from the ground up

In contrast, we’ve seen the first batch of VR-first browsers roll out by Samsung and Oculus, which have been developed from the ground up in order to offer an immersive browsing experience that requires a VR headset from the outset and throughout. In this category, we also have more nimble outfits in the game like LensVR and also the unexpected but welcome arrival this month of Supermedium, the offspring of three former Mozilla WebVR pioneers.

Both LensVR and Supermedium reflect teams that have no vested ties to any hardware or walled gardens and therefore can approach the challenge of building a VR-first browser from a more radical and purist angle, unburdened by any semblance of politics or bureaucracy to get in the way. They can experiment more freely, break things, risk whatever they like, and all for the sake of iterating their way to building a platform that allows the new medium to grow as unfettered as possible, with no agenda except to unleash it for maximum realization.

LensVR, which is comprised of former game developers and is currently in developer preview, is based on the premise that regular 2D websites shouldn’t need to be re-coded in WebVR in order to become compatible for VR. Instead, they are extending HTML and CSS so that the entire web can be made instantly accessible as VR-responsive, which would help contribute to addressing the current content gap.

“Although WebVR has ‘web’ in it, A-frame and WebVR are different than the normal web. Yes, they use HTML as “scene” description, but many other parts of the web are not taken advantage of. So if website owner wants to have VR-enabled site – they have to basically re-implement that in WebVR. Our approach is different. We are creating VR-responsive web pages.” Vacheva told me. “Imagine that there is a way for developers to add a few lines of code to an existing website in order to support a VR-ready version in the way that there is a mobile version nowadays.” 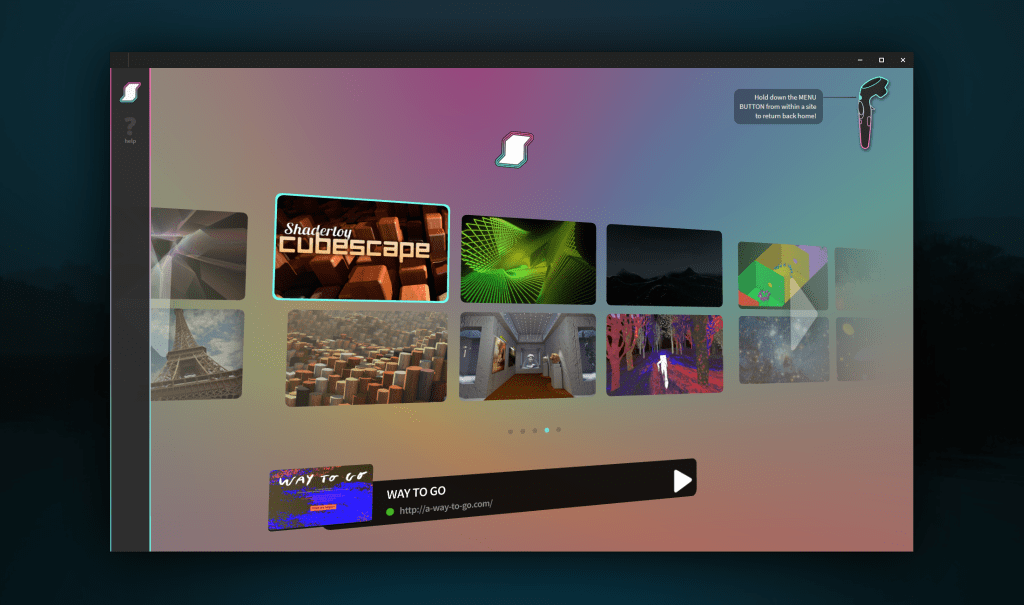 Supermedium is naturally far more WebVR-centric owing to the fact that its founders were part of the pioneering team that built Mozilla’s A-Frame framework. They aren’t paying much attention to the 2D web and have instead immediately tasked themselves in building out an index of the best WebVR content currently available. That includes actively scouring for and restoring any and all of the best-of-class immersive games, memes, and bite-sized experiences they can get their hands on to illustrate what an awesome 3D tapestry the immersive web is shaping to be.

What both LensVR and Supermedium share in common, however, is a total emphasis on reimagining and reinventing a browser UX according to the needs of a VR-specific user, and without having to make compromises or trade-offs and, most importantly, without having to ask for permission. In the case of Supermedium, the team get the additional advantage of being able to tweak and test their metaversal browser using Y Combinator’s winter batch program as a launchpad.

“We have a fresh start where we are imagining Web navigation from a VR-first standpoint. Since we don’t have to support 2D browsing, we are free to strip and scrap much of a 2D traditional browser and gear it for VR.” Diego Marcos Segura, Cofounder at Supermedium, told me. “As an independent team, we can break as many things as we want without worrying about existing users of the 2D Web.”

VR-first browsers aren’t competitors to WebVR-ready browsers either, but natural complements to them, and the common thread that unites the WebVR teams across the general-purpose browsers and this new breed of VR-first ones is in their collective outreach to the developer community. For instance, in parallel to Supermedium’s curation of the best the VR Web can offer, they are working to instill best practices in order to ensure that every next wave of WebVR experiments have applied and integrated the lessons of the last. The outcome that both they and I share in anticipation is that this might very well trigger a Cambrian explosion in WebVR content and experiences that will wash over the open web, and much sooner than you think.

“It’s a huge advantage for the Web that it enables content that would not be available otherwise. There are millions of apps but billions of websites. We know content creators that have become frustrated that their applications were rejected at the whims of app stores.” Kevin Ngo, Cofounder at Supermedium, told me. “Without the Web, for example, a teacher would not be able to publish a small educational experience for their students, or a small business would not be able to establish an online presence. The Web is a safe harbor for all forms of content, large or small, wacky or random, conforming or taboo.”

That’s the inherent nature of the open web, after all, and the reason why so many bets are being placed on WebVR and its forthcoming seismic-shifting WebXR API upgrade.