Online music provider Pandora has revealed that its on-demand music streaming service is now available on the web.

Pandora Premium was first announced in late 2016. After a short invite-only period, it was made available to everyone in the U.S. from April of last year. Unlike its free ad-supported service and Pandora Plus, Pandora Premium offers full, on-demand access to tens of millions of tracks, similar to Spotify and Apple Music.

At launch, Pandora Premium was only available on Android, iOS, Chromecast, and connected car platforms, though support was later added for Amazon’s Fire-branded devices, Android TV,  and XFINITY X1.

A desktop-based offering was sorely missing from Pandora Premium, given the $10/month fee, but from today all subscribers will be able to access their catalog from their PC or Mac. 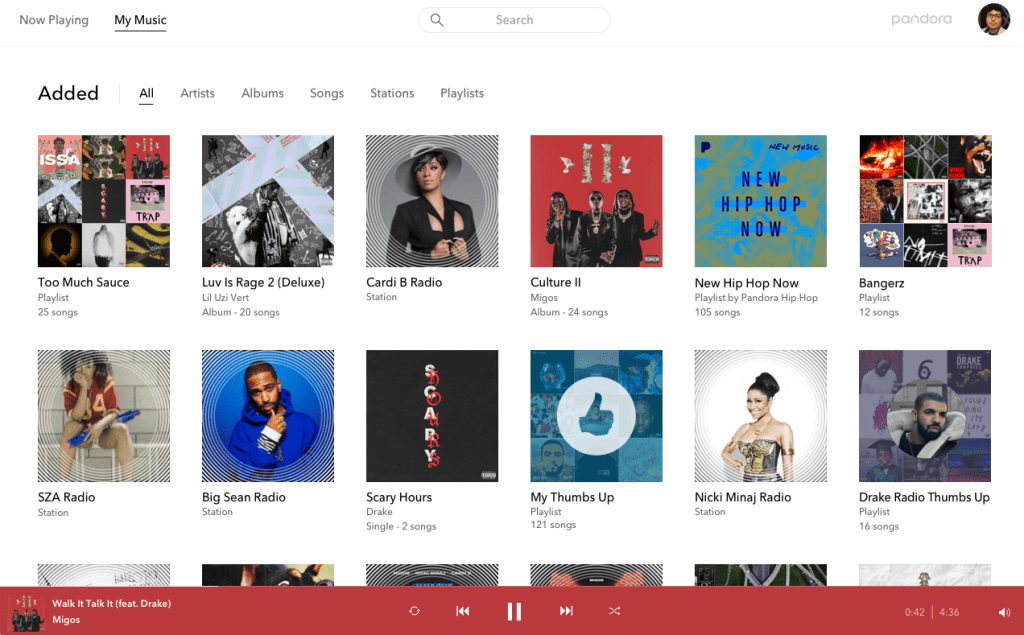 Above: Pandora Premium: My music (web)

There are, of course, some limitations to launching a web app as opposed to a native desktop app, as it means offline access to music isn’t yet available. A spokesperson wouldn’t confirm whether a native desktop app is in the works or not. However, the company said that web access has been the feature most requested by its subscribers.

Though Pandora has been streaming music for nearly 20 years now, the company has been playing catch up with the likes of Spotify and Apple Music in the on-demand sphere. While a desktop-based service is a welcome addition to Pandora Premium, the company still doesn’t offer a family plan like its competitors do, though this appears to be on the way, according to a tweet sent a few weeks ago.

Hi there, thanks for reaching out to us. Pandora Premium for web is coming. Additionally, streaming from two devices at the same time is not a feature of Pandora. However, a family Plan is in the works that would allow different listeners to stream simultaneously.

The timing of this latest announcement is notable, as Pandora is preparing to announce its Q4 2017 results next week. Shareholders will be hoping for better news than the Q3 results, which saw Pandora’s overall active listeners drop for the third straight quarter, while its ad income — which represents most of the company’s revenue — missed expectations. The company’s shares fell around 40 percent in the aftermath of that report and went on to hit an all-time low of $4.13 a share in January.

Pandora Premium passed 1 million subscribers in October of last year, a far cry from Spotify’s 70 million subscribers, and it will need to boost this figure considerably if it’s to rely less on ad revenues and put a dent in the mighty Spotify and Apple.