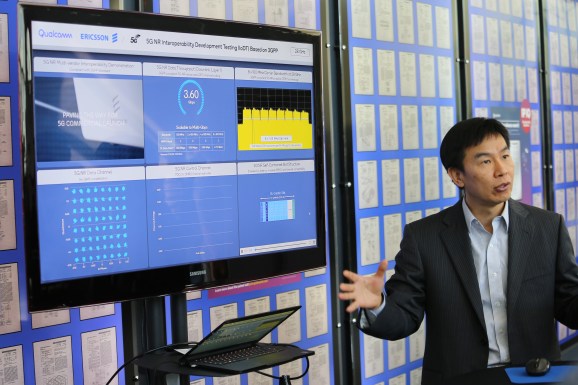 A representative of ZTE discusses 5G testing results at Qualcomm headquarters on Feb. 7, 2018.

Reeling from highly public accusations of espionage levied by U.S. intelligence officials, Chinese mobile hardware manufacturer ZTE is expanding its sales efforts in Japan, where it is using low-cost 5G cellular equipment to woo potential customers. The Nikkei Asian Review reports that ZTE is working to win 5G contracts from Japanese carriers ahead of the 2020 Tokyo Olympics, which it expects “will become the world’s showcase for 5G technology.”

According to the report, ZTE has priced its hardware at roughly one-fifth the cost of European and Japanese competitors’ products and is using its growing Tokyo office to pitch Asian and South American companies. ZTE already has a non-exclusive 5G hardware partnership with SoftBank, Japan’s third-largest carrier, which it expects will lead to both 5G base station and handset sales.

ZTE also hopes to sell 5G networking gear to Japan’s leading carriers, NTT Docomo and KDDI, though that is expected to progress more slowly. On the 4G side, ZTE recently collaborated with NTT Docomo to develop a dual-screen foldable smartphone called M Z-01K, which was released last week in Japan — and late last year by AT&T as the Axon M.

U.S. officials have actively urged customers not to purchase ZTE or Huawei phones and have lobbied carriers to cut ties with the Chinese companies for security reasons. 5G networking gear is expected to be used for everything from phones to autonomous cars, factories, and city infrastructure, radically increasing security risks and consequences compared to its 4G predecessor.

As recently as last month, ZTE had hoped to expand in the United States and had announced plans to release its first 5G smartphone here later this year, ahead of competitors. But the announcement was quickly overshadowed by members of Congress, who spotlighted six years of investigations into the companies’ clandestine ties to China’s government. The heads of the FBI, CIA, and NSA reiterated those security concerns this week, leading ZTE USA to issue a public statement:

ZTE is proud of the innovation and security of our products in the U.S. market. As a publicly traded company, we are committed to adhering to all applicable laws and regulations of the United States, work with carriers to pass strict testing protocols, and adhere to the highest business standards. Our mobile phones and other devices incorporate U.S.-made chipsets, U.S.-made operating systems and other components. ZTE takes cybersecurity and privacy seriously and remains a trusted partner to our U.S. suppliers, U.S. customers and the people who use our high quality and affordable products for their communications needs.

U.S. concerns aside, a global rush to install affordable 5G hardware may help ZTE in some markets, as other countries have recently accelerated their plans for next-generation cellular networks. International standards organization 3GPP completed work on a key 5G standard six months ahead of schedule, enabling major U.S. carriers to promise initial 5G rollouts in 2018.

Though Japanese carriers have largely stuck to 2020 timetables, most appear set to have some 5G infrastructure in place by next year. Other Asian countries are still working out their plans: Malaysia may roll out 5G in 2022-2023, while India just announced that it will finalize its 5G roadmap by this June to keep the country at the “leading edge of technology.”