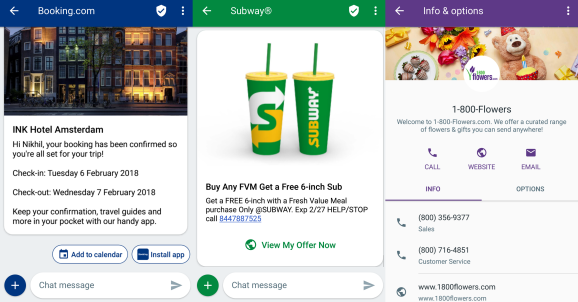 Google yesterday announced that the rich communication services (RCS) messaging experience on Android is now open to businesses. Nobody is using RCS yet, but businesses are already being encouraged to get on board. This is a big mistake.

First, some background. The default SMS app on Android — unless the carrier decides to change it — is called Messages. Google is using this app to push its implementation of RCS so that Android phones can offer features like group messaging, IP voice calls, and file sharing. The service is powered by the Jibe RCS cloud (Google acquired Jibe in September 2015).

Google also shared this week that it has now partnered with 43 carriers and device manufacturers to bring RCS messaging to every Android user (although the company notes 60 support the standard in some form). That’s decent progress (the last major partnership, with Huawei, was announced in January), and it’s unfortunate the company is squandering things with its “RCS business messaging” push.

Here’s the pitch, in Google’s own words:

Last year we created an Early Access Program to make it easier for brands to start participating in RCS business messaging (the mobile industry’s term for rich business-to-consumer messages). Today companies across food, travel, retail and delivery services in the U.S. and Mexico are starting to have better conversations with their customers using RCS as part of our Early Access Program. With RCS, businesses can send more useful and interactive messages to their customers. This means, for example, that a retailer can send beautiful images of their products, rather than a text message, and even let the customer select and buy something, all without leaving the messaging app.

None of this sounds terrible, per se, especially since Google claims users have to opt-in. Unfortunately, RCS barely has any adoption, and timing is everything.

RCS is a fledgling that needs nurturing

For RCS to gain momentum, Google has to convince both carriers and smartphone makers to support the technology. It’s simply not there yet. Here’s the list so far:

That’s not bad, especially given Google has only been at this for two years. But key players — like the top two smartphone makers, Samsung and Apple — are still missing (Correction: Samsung supports RCS, just doesn’t use Android Messages by default), not to mention a slew of major carriers.

While Google continues to add partners, it isn’t sharing estimates on how many RCS messages are actually being sent. Google is instead talking about the potential of its partnerships, which it says amount to “more than 1.8 billion mobile subscribers worldwide.”

Even if both your phone and your carrier support RCS, which is already a stretch, chances are you aren’t using it. The reason for this is simple: The recipient also has to be using a phone and carrier that supports RCS.

Realistically, you’re using Facebook Messenger, WhatsApp, WeChat, or any number of the various messaging apps out there.

RCS could turn into brand hell

Can you imagine if any of today’s successful messaging apps let businesses spam users in their early days, long before you and your friends had embraced them? There is no way these apps would have the billions of users they have today.

Already most of Android users’ communications with their friends happens outside of Android Messages. If your first interaction with RCS is a business message, you’re going to be even less likely to use it yourself. If Google doesn’t realize this and adjust accordingly, chances are all your RCS communications will be from businesses, a horrible experience if you’re trying to compete with all the messaging apps that already significantly augment texting.

It doesn’t matter if those RCS messages are engaging, useful, or even cute. They’re going to be seen as annoying, ads, or even spam.

(It could be that this is exactly what Google wants, given that the majority of its revenue comes from advertising. I don’t believe that, however, as RCS has way too much potential and requires a disproportionate effort to grow if it’s just going to be used for marketing purposes.)

I could see a future where Android Messages, or maybe even texting in general, is simply accepted as a way of communicating with businesses and brands. Third-party messaging apps will be for everything else.

That’s not going to help RCS adoption. Google needs to significantly slow down its business push if it wants RCS to make a difference.

You can’t spam your way into organic growth.

Update at 11:25 a.m. Pacific: Google wants to make clear that businesses will not be able to easily spam users with RCS.

“With our Early Access Program we review each campaign to ensure messages are not spam,” a Google spokesperson told VentureBeat. “It’s also important to note, these business messages are ones that people have specifically opted into receiving and they can opt-out at any time. As we continue to grow, we will have policies that prohibit spam and both automated and manual mechanisms to protect users.”