KeepTruckin, a company that provides trucking firms with technology for tracking vehicles and keeping digital logs of hours driven, has raised $50 million in a series C round of funding led by IVP, with participation from existing investors GV (formerly Google Ventures), Index Ventures, and Scale Venture Partners.

Founded out of San Francisco in 2013, KeepTruckin provides a physical electronic logging device (ELD) that’s attached to trucks and enables companies to track all their vehicles in real time and view their location history plotted on a map, as well as letting them audit driver logs and manage fuel taxes. Drivers can also track their hours on the road through a smartphone app and receive alerts when it’s time to take a break. 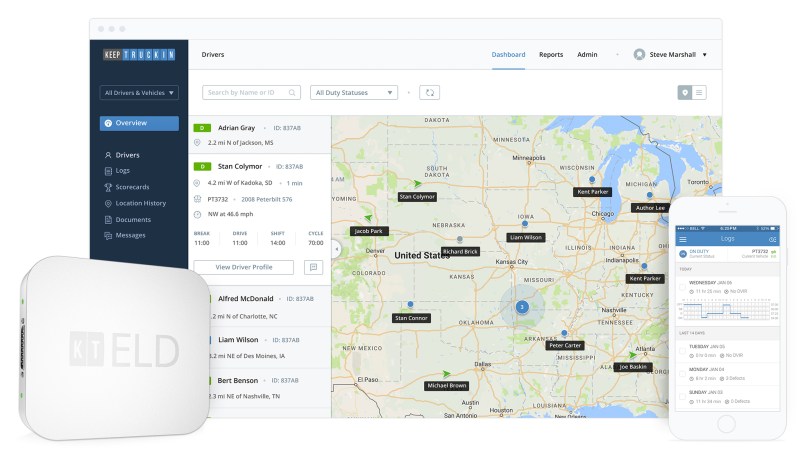 Prior to now, KeepTruckin had raised around $28 million, including an $18 million round less than a year ago, and with its latest cash injection the company plans to “invest in product development, expand sales and support teams, and enter new markets,” according to a statement.

“To our knowledge, we’re one of the fastest-growing SaaS companies ever,” noted KeepTruckin cofounder and CEO Shoaib Makani. “More importantly, we are building the largest network of connected trucks in the world and fundamentally improving the safety and efficiency of the trucking industry. With this new investment, our network will grow to 400,000 trucks by the end of 2018.”

Already this year, Sequoia led a $21 million round to help Next Trucking match truck carriers with shippers. And Alphabet’s autonomous vehicle arm Waymo announced that it was piloting self-driving cargo trucks in Atlanta.

KeepTruckin said it has seen significant growth over the past year and now claims 30,000 clients — up from 500 the previous year — in addition to growing its team seven-fold to 500 employees. The company’s raise comes less than two weeks before new legislation takes effect mandating that all truck drivers who are currently required to maintain records of duty status (RODS) install a compliant ELD.

“KeepTruckin has harnessed the power of the smartphone to build a driver-first electronic logs and fleet management tool,” said IVP general partner Sandy Miller. “It is one of the fastest-growing software companies we’ve ever seen.”