The problems women in tech face are well documented. But what happens when the tech itself causes problems for women? Facebook’s ad policies were called out for being biased against women’s health in 2015. After interviewing founders from multiple femtech startups, VentureBeat has found little has changed in the three years since.

These past few weeks have been rough for Facebook. The social network and its founder and CEO, Mark Zuckerberg, are currently under investigation over the Cambridge Analytica data breach, which has led to a widespread #DeleteFacebook campaign. And ongoing privacy issues ensure this saga is far from over. These ad policies, meanwhile, are just icing on the multilayered cake.

Uqora founder and CEO Jenna Ryan says Facebook is strict when it comes to marketing anything related to sexual health, which is particularly problematic for a startup that targets urinary tract infections (UTIs).

“We post a lot of content about vaginal health since that’s the space we live in,” she told VentureBeat in an interview. “But oftentimes, posts that use the word ‘vagina’ or ‘vaginal’ are flagged and removed.”

Ryan and her team had tried promoting a post about bacterial vaginosis titled “Can BV (bacterial vaginosis) be the cause of your recurring UTIs?” After Facebook flagged the ad accompanied by an image of a man and woman’s feet tangled in bed, Uqora tried using a more subtle image — that of a half grapefruit, which was meant to represent a woman’s vulva. The new post was flagged and removed as well. 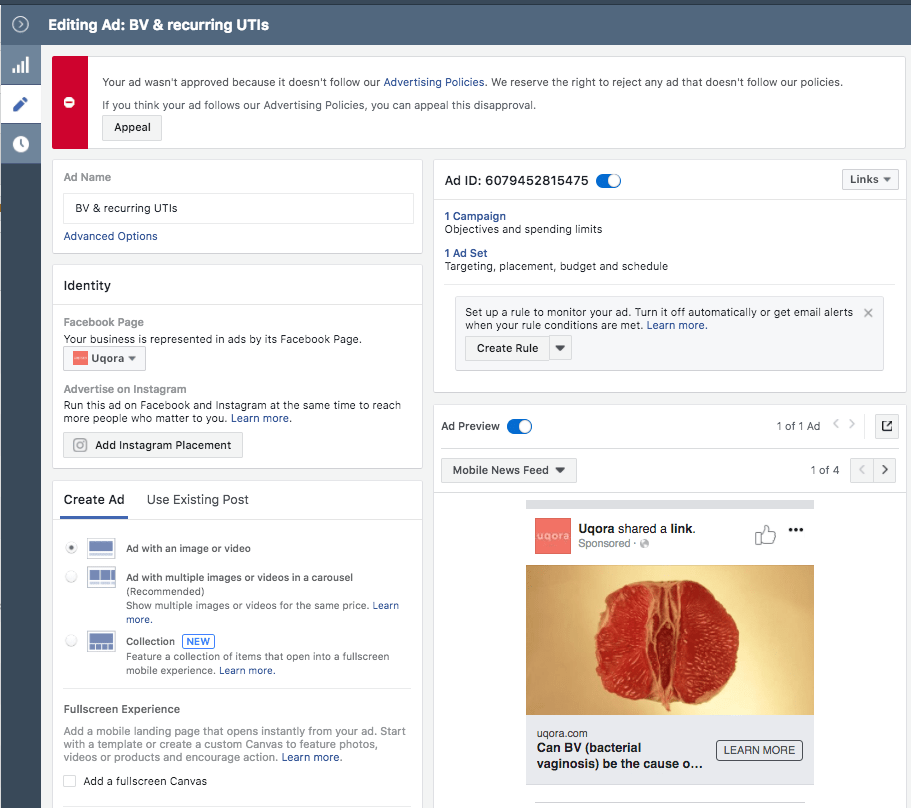 (When we asked, Facebook would not disclose why this particular ad was flagged.)

“Facebook doesn’t seem to be a fan of healthy sex and healthy vaginas,” Ryan said. “I don’t necessarily criminalize them for having a check and balance system, but if they allow condom ads, they should allow ads targeting women’s health.”

Ryan isn’t the only female femtech founder to have to censor her content on Facebook. Joylux founder and CEO Colette Courtion is also finding it challenging to promote her product — a vaginal rejuvenation device — on the platform. Women can use vSculpt (cleared in Europe and Canada) at home to tighten their vaginal tissue and pelvic floor, which can prevent incontinence and improve sexual intercourse, according to Courtion. 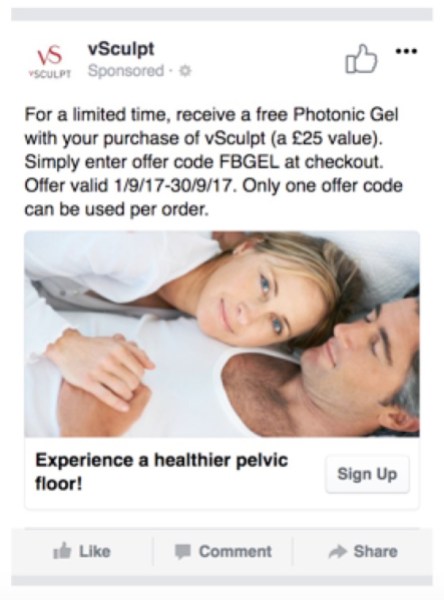 When we asked, a Facebook spokesperson was not sure why this particular ad was flagged.

“This is an ad we could not get approved on Facebook for the life of us,” Courtion told VentureBeat in an interview. “We didn’t know if it was the image, the ‘free gel’, ‘healthier pelvic floor’, or a combination of the three. We were concerned they were classifying us as an adult product versus what we are — a medical device treating common conditions that affect many women.”

As a social network with more than 2 billion monthly active users, Facebook does have a responsibility to monitor the content that is being promoted on its platform, especially in light of its younger audience. But rather than block posts that are clearly related to a woman’s health, the company should be clearer about what is, and isn’t, allowed.

“You can have a lingerie ad with a woman who is practically naked and that’s approved,” Courtion said. “But when we even suggest anything that’s related to vaginal health, we get blocked.”

Words like “vaginosis” and “pelvic floor” are legitimate terms relating to a woman’s anatomy and physiology. And so I wondered whether ads with words like “sperm” and “semen” also caused problems. Ava, a startup that makes and sells an ovulation-tracking bracelet, tested the theory.

“I can share an experience we had that revealed the double standard built into Facebook’s algorithms when it comes to talking about men’s and women’s bodies,” wrote Ava’s head of content, Lindsay Meisel, in an email to VentureBeat.

She explained that her team tried to promote a post to help women understand what their cervical mucus tells them about their health and fertility. When Meisel tried to boost the post on Facebook, it was not approved. 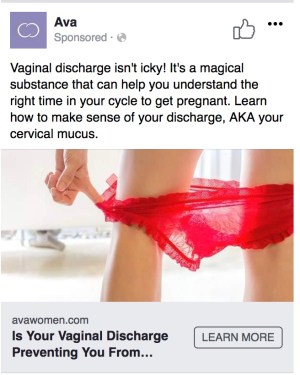 When we asked, a Facebook spokesperson told us the problem with this ad was the image, not the text.

“We thought that maybe Facebook has a policy against talking about either gender’s bodily fluids,” Meisel added. “But we found multiple examples from prominent sites talking about what a man’s semen reveals about his overall health. And we were able to boost a Huffington Post article about semen from the Ava Facebook account without any issue.” 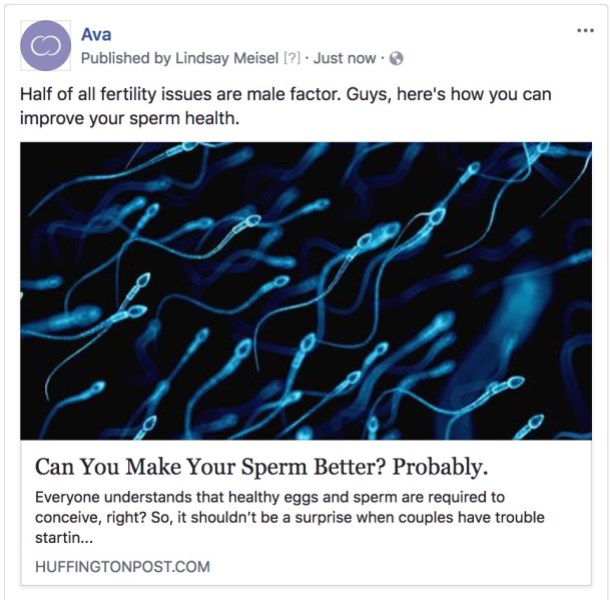 When we asked, a Facebook spokesperson told us this ad was mistakenly approved. After we let them know about it, the company disapproved it, stating that the text violates Facebook’s policy about personal attributes.

“So, according to Facebook’s advertising algorithms, it seems that talking about a woman’s cervical mucus is inappropriate and sexual, but talking about a man’s semen is welcomed,” Meisel said. “We can’t see this as anything other than an unfair double standard.”

Facebook’s ad policy team has a tricky job of informing advertisers what is against the rules without divulging too much to make sure its algorithms can’t easily be tricked. But we received different answers than these femtech startups did for the same ads, suggesting the rules aren’t being properly enforced from the start.