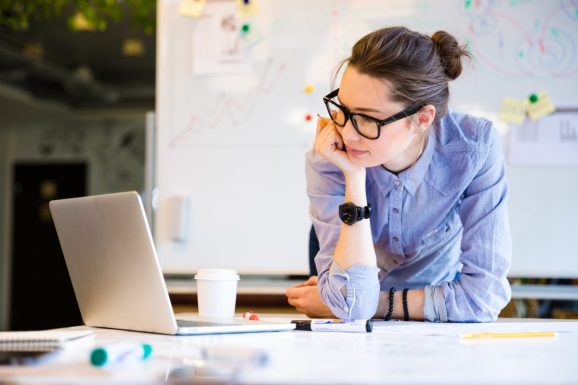 Women in tech leave their jobs because of lack of career growth.

Have you ever wondered why so many companies program robots, virtual assistants, and AI with feminine traits? Have you ever pondered, if there were more women behind the algorithms, how AI would be different — not just vocally and aesthetically, but functionally?

With Alexa, Cortana, Siri, Google Home, and most GPS systems defaulting to female, there has been plenty of speculation over the ubiquity of demure, ladylike tones emitted from the speakers of modern machines.

One reason? Research has demonstrated a greater affinity for female voices on the part of men and women alike, prompting big tech companies like Amazon to opt for “Alexa” over “Alexander.” Still, it’s impossible to ignore the gendered implications at play, even if consumer demand drives such decisions. Why is the female voice pleasing in this context to begin with?

Industry insiders like Jason Mars have admitted that the female AI voice plays into the familiar gender stereotypes of women as helpful, subservient, and non-threatening. This alone takes on a more sinister light when you dig a little deeper. “By codifying AI and intelligent machines as women,” an article on Villainess asserts, “we’re reinforcing our own sexism and misogyny — including toward real, human women.”

Also troubling is that companies program these digital personas to remain demure when sexually “harassed.” Most notably, Amazon’s Alexa used to respond “thanks for the feedback” when addressed with derogatory remarks — hardly a harbinger of robot or female empowerment.

AI itself has learned sexist behavior by amplifying biases found in existing data. In one instance, stock photos of women in kitchens and men in fields were not just mirrored by AI, but given a boost, resulting in the misgendering of men due primarily to their proximity to cooking supplies.

A key factor in this conversation is that AIs are still mostly created by men, and white men in particular. Machines necessarily take on values and function as dictated by their creators, whether these values are intentional or not. Assemble a group of men and ask them to brainstorm AI applications, and you’ll get entirely different results than you would from a group of women. That’s not because their talents are different, but because their lived experiences, priorities, and worldviews are.

The gender gap in AI is striking, but unsurprising given the dearth of women in computer science and STEM fields. According to some estimates, as few as 13.5 percent of the machine learning field is female, while 18 percent of software developers and 21 percent of computer programmers identify as women.

The solution is at once obvious and elusive: We need a more intersectional approach to AI programming, brought about by the recruitment of more female engineers. But one does not simply turn cultural norms on their head in one swift motion; we need to play the long game, encouraging women to get involved in this increasingly vital field before it’s too late.

Heather Roff, an AI and global security researcher at Arizona State University, explained in an article for Foreign Policy how smart algorithms that double down on gender stereotypes work against society. If researchers code bias into an application, it is likely to further condition men and women to conform to traditional roles and buy into all the associated products. Targeted ads are already feeding bias, with certain algorithms perpetuating the pay gap by targeting listings for higher-paying jobs toward men. It doesn’t take much imagination to envision how much worse this could get.

The risks are perhaps best stated by Fei-Fei Li, director of the Stanford Artificial Intelligence Lab and the Stanford Vision Lab. “If we don’t get women and people of color at the table — real technologists doing the real work — we will bias systems,” she said. “Trying to reverse that a decade or two from now will be so much more difficult, if not close to impossible. This is the time to get women and diverse voices in so that we build it properly.”

Fortunately, Li and other women are putting in the work now to see the payoff sooner rather than later. Along with Melinda Gates, Li cofounded AI4All, a nonprofit that works to create pipelines for underrepresented talent through education, mentorship, and early exposure to AI’s potential for social good.

Angelica Lim, a professor at SFU, launched a two-week summer enrichment program for girls through AI4All that’s called “Invent the Future.” She is developing sympathetic humanoid robots in SFU’s “Robots with Social Intelligence and Empathy” lab (ROSIE) that can “not only have conversations with humans but also have the capacity for compassion.”

Other prominent women in AI, long viewed as token in their field, have organized regular conventions to realize their strength in numbers and work toward common goals. “Women in AI” is a group of international AI and machine learning experts who also happen to be women. Their mission is to help improve diversity and close the gender gap in AI while helping companies and events source more female experts in the field.

Assuming these programs are successful, what would change? How would a world with more equity behind AI algorithms look different from the one we’re seeing unfold now?

According to Kriti Sharma, Sage vice president of AI and Bots, “The biggest hurdle standing in the way of making AI a transformative and productivity-enhancing revolution for all is the danger of building machines that don’t represent the entire human race.” Her company created a dedicated AI code of ethics to guide businesses working with human-facing AI.

Machines that do represent all genders and races, then, would be infinitely more likely to service us all equally as we blaze forward into an uncharted future. This will be especially important as AI further penetrates fields like health care, government, and education, impactful and formative spaces that have gendered issues of their own to resolve.

Solutions to patriarchy-induced struggles for equal pay, rights, and opportunity may also be on the horizon, should AI be stopped from propping up capitalistic pursuits at the expense of equality.

All in all, the gender of a personal assistant’s voice may be the least of potential concerns, but the kind of thinking that perpetuates women as the product and men the builders is the kind that needs fixing. When women earn representation in this field, the emerging cycle of amplified bias in AI will be not only short-circuited but reversed.