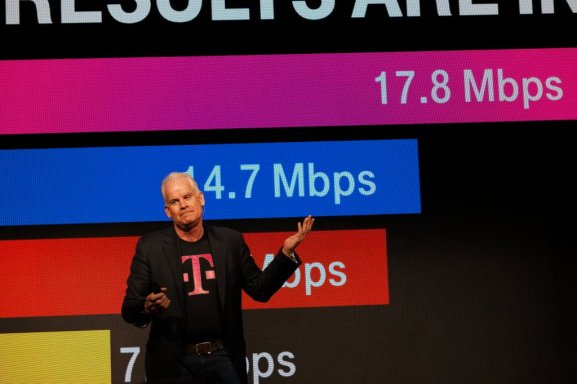 Ignore T-Mobile CTO Neville Ray’s earlier statements on the “double yawn” concept of using 5G wireless technology to replace cable-based broadband and TV services. Now that a merger with Sprint is in the works, T-Mobile is actively looking at so-called “fixed 5G” as a way to challenge wired internet and TV providers across the country, following Verizon’s earlier — and derided — decision to do the same for its 5G rollout in 2018.

What’s changed, T-Mobile’s Mike Sievert said during an earnings call with analysts, is the combined strength of T-Mobile’s 600MHz and Sprint’s 2.5GHz 5G network resources following a merger. While initial speeds may be slow, Sievert expects that their combined 5G speed will hit 450 megabits per second (Mbps) within the company’s planning horizon, and claims that will be the national average, not just in specific areas served by millimeter wave small cells.

If the 450Mbps number is accurate, it converts to just over 56 megabytes per second (MBps), which Sievert described as “way higher than most people get in their home broadband today.” He noted that the broadband market is currently underserved due to a lack of competition, as 53 percent of broadband customers have only one choice. T-Mobile now sees fixed 5G as an opportunity that could be exploited on the internet side, as well as on the TV side thanks to its recent acquisition of Layer3 TV.

Though T-Mobile has committed to building a “mobile 5G” network focused on supplying smartphones and other mobile devices with wireless service, it’s not difficult to add fixed 5G hardware that remains tethered in homes. Samsung already has fixed 5G “consumer premises equipment” ready to go, and rival Inseego will similarly have a Novatel-branded alternative available by the time T-Mobile’s network launches in 2019.

There are obviously a few big “ifs” here: T-Mobile still has to complete its deal with Sprint, launch its 5G network, and get that network up to a competitive performance level in historically underserved areas. It also remains to be seen when and how the cable companies will respond; they could ratchet up the performance of their wired networks to give consumers better speeds, or expand their cabling to reach more homes. In any case, it’s fair to assume that increased broadband service competition from both cable and wireless providers will be great for consumers over the next couple of years.