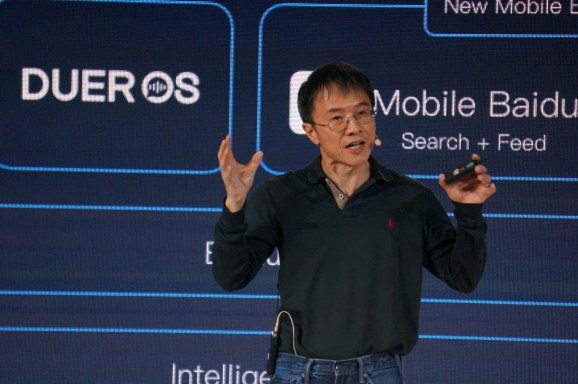 Baidu COO Qi Lu speaks at the company's keynote during the Consumer Electronics Show in Las Vegas on January 8, 2018.

Baidu today announced that COO Qi Lu will step down in July for personal and family reasons. Lu had been brought aboard to help the Chinese search giant become more centrally focused on AI services.

Since he joined Baidu, the company has launched a smart speaker, its Duer virtual assistant, and a $1.5 billion fund to grow its Apollo autonomous driving division.

Lu will continue to serve as vice chairman of the Baidu board of directors, a company spokesperson told VentureBeat in an email. He joined Baidu in 2017 after nearly a decade at Microsoft, where he acted as head of search, helped create AI assistant Cortana, and worked closely with CEO Satya Nadella.

“With Baidu’s strategy to transform into an AI-first company firmly in place, we are well positioned to continue the momentum that we have built in the past year,” CEO Robin Li said in a statement shared with VentureBeat.

As part of a consolidation of its various AI products in the wake on Ng’s departure, Haifeng Wang was named general manager of the AI Group and reported directly to Lu.

In the absence of a COO, Wang and other senior executives will now report directly to Li, a company spokesperson told VentureBeat.