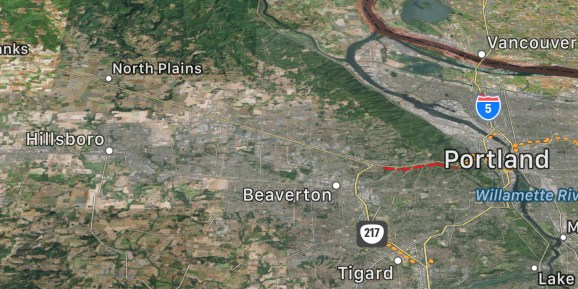 Apple's new hardware lab is said to be between Beaverton and Hillsboro, near Portland.

Apple has reportedly opened a “secret” hardware engineering lab in Washington County, Oregon and hired employees who previously held senior research and engineering positions at Intel. According to the Oregonian, the facility is at least the fourth to be opened by Apple in the state, though the lab’s exact location and purpose are presently unknown.

Despite online job postings mentioning nearby Portland, the report indicates that the lab is actually “near the border between Beaverton and Hillsboro,” a part of Oregon known more for hardware development than software or cloud companies. Hiring has apparently been ongoing since last November and has included “raiding” of Intel and other Oregon tech employers. Apple is specifically said to be looking for design verification expertise, referring to the process of validating mass-produced hardware’s conformance to specifications.

In April, Apple reportedly decided to begin transitioning its Mac computers from Intel processors to internally developed chips, a multi-step process that was projected to begin in 2020. Though Apple already maintains chip development labs in multiple cities, and uses self-developed CPU/GPU chips in mobile devices, the company is expected to need considerably more powerful processors for its desktop machines. Bringing on senior Intel personnel could assist in that effort.

Apple has previously opened offices throughout the Pacific Northwest to add talent from AI/machine learning and cloud companies. The new office is not expected to be related to Apple’s plan to open a fourth major U.S. campus, which recent rumors suggest will most likely to be located in North Carolina or Virginia.