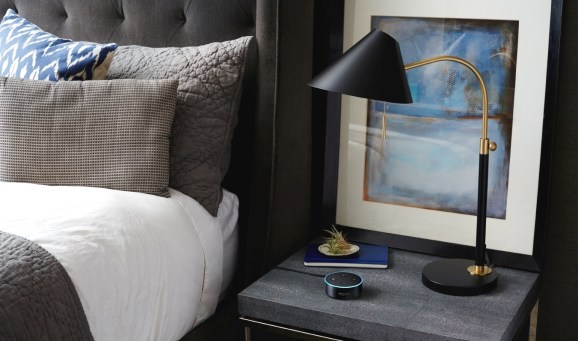 Though Amazon’s Alexa-powered Echo speakers are growing in popularity across the domestic realm — helping users control their doors, lights, and search the web using nothing but their voice — the internet giant has been targeting the hospitality sector for a while already. High-end hotel firm Wynn Resorts has been placing thousands of Amazon Echo speakers in its hotels since last summer, for example. And as of April, Alexa has been able to make phone calls in hotel rooms.

Put simply, Amazon recognizes that hotels are a perfect showcase for its automated AI technologies. Hotel guests expect convenience, and that is exactly what Alexa promises.

Now, however, Amazon is going one step further with the Alexa for Hospitality program, which will “help increase guest access to amenities” and “improve employee productivity,” according to a press release.

This is more than simply putting an Echo on your bedside table to replicate the tasks performed by the Echo in your living room at home. The idea here is that guests will be able to ask Alexa for specific information, such as pool hours, as well as ordering room service or asking the concierge for dinner recommendations using just their voice.

“Customers tell us they love how easy it is to get information, enjoy entertainment, and control connected devices by simply asking Alexa, and we want to offer those experiences everywhere customers want them,” said Amazon VP Daniel Rausch. “Alexa for Hospitality makes your hotel stay a little more like being at home and gives hospitality providers new ways to create memorable stays for their guests.”

Through Alexa for Hospitality, hotels can configure Alexa so that guests are able to control their various connected in-room gadgets, such as thermostats, TVs, and lights, as they would at home. But these integrations open up some interesting future use cases, too. According to Amazon, guests will soon be able to connect their own Amazon account to the Alexa-powered device in their room so they can access their music and audiobooks. This integration will be temporary, with the connection automatically cut once a guest checks out.

The first results of Amazon’s new hospitality program will kick off this summer at a number of Marriott International hotels, according to Amazon, though the company is opening invitations to all hospitality companies, starting today.

It has been clear for some time that voice will be the next big platform. Earlier this month, Amazon launched the new Alexa-powered Echo Look smart speaker that sports a camera and can help you pick out what clothes to wear. Mozilla is also pushing ahead with its crowdsourced Common Voice project, an initiative that aims to build an open source voice-recognition dataset.

Alexa for Hospitality is a notable development for Amazon as the tech giant doubles down on its efforts to corner the fast-growing AI smart speaker market. With the likes of Google, Apple, and Microsoft all pushing ahead with their own version of Alexa and Echo, Amazon is keen to grab as much mindshare as it can. In short, it’s striking while the iron is hot. Reports emerged last year that Amazon and Apple were battling it out to become the voice assistant of choice at Marriott hotels, and today’s news gives a strong indication as to who the early winner is.

In related news, Amazon also announced today that it’s expanding Alexa’s linguistic skills to include Spanish and Italian, as the company prepares to launch the virtual assistant and associated hardware in those countries later this year.