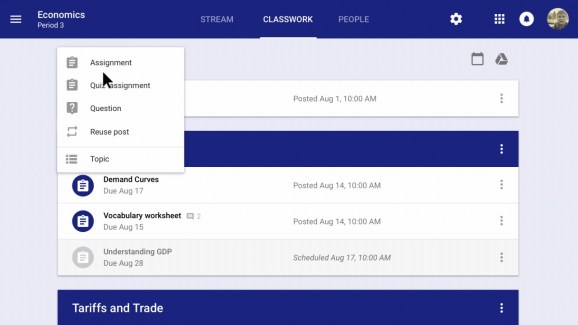 Google today announced a series of updates for educators using its solutions, including the power to make quizzes in Google Classroom and a new lock mode feature with Google Forms that allows teachers to disable navigation away from an assignment.

The Classwork page on Google Classroom lets teachers organize assignments by topic, while the People page allows them to better manage interactions with students, parents or guardians, and other teachers.

Also coming soon: Chromebook off hours, a feature being introduced to give parents more control of school-issued laptops at home.

New hardware for educators being introduced today includes the Acer Chromebook Tab 10, which uses the same operating system as Chromebooks, and the Staedtler Noris, a stylus designed to look and feel like a pencil that’s made to work with Chromebooks and will work with a variety of apps due out this summer. Education pricing for the Jamboard, Google’s interactive whiteboard, was also introduced today.

And updates were made to Google’s digital education services for students, like new Applied Digital Skills training for middle and high school students.

Google Classroom was launched in August 2014 to give teachers a platform for assigning tasks to students and facilitating coursework development. Last summer, Google added several new features and passed the 1 billion assignments submitted milestone. Other major updates since launch include a Classroom Chrome extension that lets students and teachers surf the web together and the introduction of the Coursework API.

More than 25 million teachers and students use Chromebooks worldwide, while more than half of all primary and secondary school students in the United States use Google education apps.

The series of changes was announced ahead of a gathering of the International Society for Technology in Education in Chicago.

Last week, Facebook introduced Workplace for Good and made Workplace by Facebook Premium  free for educators and nonprofit organizations.