Self-driving cars of the future will have a lot of computing power, which means they’ll also need fast networking. So five tech and car companies have teamed up to form the Networking for Autonomous Vehicles (NAV) Alliance. The initial members of the San Jose, California-based alliance include Aquantia, Bosch, Continental, Nvidia, and Volkswagen.

Chips for autonomous vehicles are expected to generate a $30 billion market by 2030, according to analyst firm Raymond James.

At the core of the alliance is Aquantia’s chips, which enable multi-gig ethernet networking that can transfer data at a rate of up to 10 gigabits a second. That’s necessary in self-driving cars because they need to transfer huge amounts of data coming in from multiple cameras and sensors, Aquantia founder Phil Delansay said an earlier interview.

Autonomous driving demands a new breed of in-vehicle networking solutions that can transmit data between the increasing number of high-resolution sensors, cameras, and processing engines at faster speeds. The alliance will drive the ecosystem development required for the next generation of multi-gig ethernet networking in vehicles. 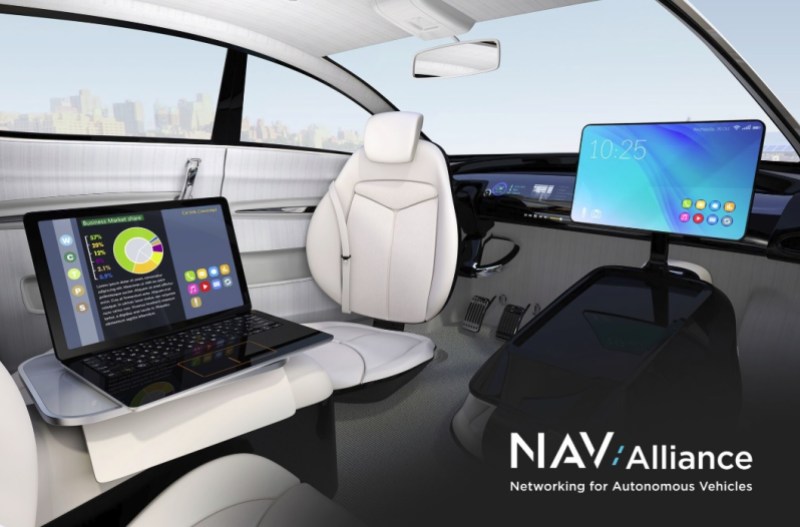 Self-driving cars (like the one I rode in last week) have become datacenters on wheels, constantly analyzing vast amounts of data to ensure the safest and most secure experience for passengers, pedestrians, and other vehicles.

“Redundant and diverse AI algorithms are the key to level 5 automation (the highest level of self-driving cars, where humans are mere passengers),” said James Hodgson, senior analyst for autonomous driving at ABI Research, in a statement. “However, the volume of data generated by multiple types of sensors (camera, radar, lidar, ultrasound) can reach 32 terabytes every 8 hours — that level of data transfer calls for a new breed of ultra-high-speed networks, including multi-gig ethernet. The NAV alliance will catalyze the development of a reliable next generation of networking platform for self-driving cars.” 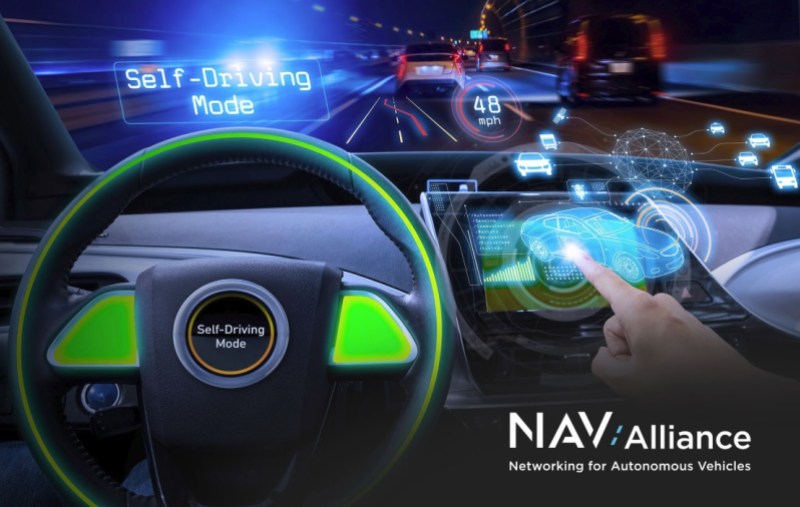 Above: Self-driving cars of the future will need fast networking from sensors to computation devices.

Akin to a very advanced nervous system, the next-generation networking architecture will be based on an array of engine control units (ECUs), central processing units (CPUs), graphics processing units (GPUs), high-definition cameras, sensors, gateways, and storage devices — all connected through a high-speed, multi-gigabit ethernet network that works to seamlessly move data throughout the vehicle securely and reliably.

“Aquantia has been driving the multi-gig ethernet revolution in other markets for several years,” said Amir Bar-Niv, vice president of marketing for strategic markets at Aquantia, in a statement. “Now, the in-vehicle network for autonomous driving requires a level of high-bandwidth functionality that was previously the domain of the most demanding datacenter applications. The creation of the NAV Alliance and the focus on multi-gig ethernet will help drive strong industry standards that can ultimately change the role of transportation in society.”