Amazon is making a big push to bring its Alexa digital assistant front and center on Amazon Fire tablets.

The ecommerce giant today introduced a new “show mode” feature for Fire HD 8 and Fire HD 10 tablets, one that offers an “immersive hands-free Alexa experience,” according to a statement issued by the company.

Show mode effectively takes the Fire tablet display full-screen, allowing Alexa to serve up visual responses in addition to the usual audio-based answers. So if you ask Alexa for the latest news, weather, or upcoming calendar events, the assistant can display text or tell you verbally. To activate show mode, you need to swipe down to access the Quick Settings menu, and then toggle the show mode on / off. Above: Fire tablet in “show mode

Alexa first came to life via Amazon’s Echo speakers in 2014, and the company has launched a bunch of Echo-branded speakers in the intervening years. However, Amazon wants Alexa to be the brains and voice behind all your connected devices, which is why it added Alexa to Fire tablets in 2016. But it wasn’t until the Fire HD 10 launch last year that Alexa went hands-free on a tablet, meaning you could converse with Alexa without having to wake the device up manually. Amazon added similar functionality to the Fire 7 and HD 8 a few months back, though it had some limitations.

With this latest rollout, which will be arriving via an over-the-air software update from July 2, Amazon is essentially positioning its tablet lineup as more affordable versions of the Echo Show, the company’s first “screened” Echo device that launched last year. This is also where the “show mode” nomenclature likely comes from. The microphone and speaker capabilities might not be quite as good on a Fire tablet as on the Echo, but the update serves as an easy way for Amazon to showcase Alexa’s talents to existing Fire tablet owners, and it performs most of the same functions as a standard Echo device.

It’s worth noting here that the existing hands-free Alexa functionality on Fire tablets seems fairly similar to show mode, insofar as you can ask to see weather forecasts, news, connected camera footage, and so on. But one key difference appears to be that show mode takes the visuals completely edge-to-edge on the screen. 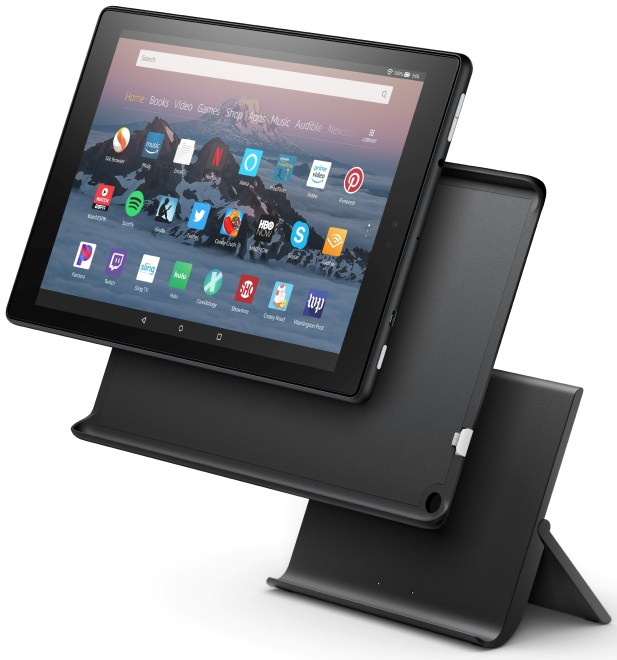 The charging dock also sports an adjustable stand so you can move it up and down to suit your preferred viewing position. The show mode charging dock will cost $40 for the Fire HD 8 version, though it will initially be available at a $5 discount. The Fire HD 10 incarnation will cost $55, but it too offers a $5 discount at launch. Preorders are open today, with shipping expected from July 12.

Amazon is also offering special bundles for new customers, meaning you can get a Fire HD 8 tablet with the show mode charging dock included from $110, while a similar Fire HD 10 package is available starting at $190.

In other news today, Amazon launched a new child-focused version of its Fire HD 10 tablet. The company has rolled out versions of its tablets for kids since 2014, and now it’s time for the big-screen Fire HD 10 to get the kiddie treatment. 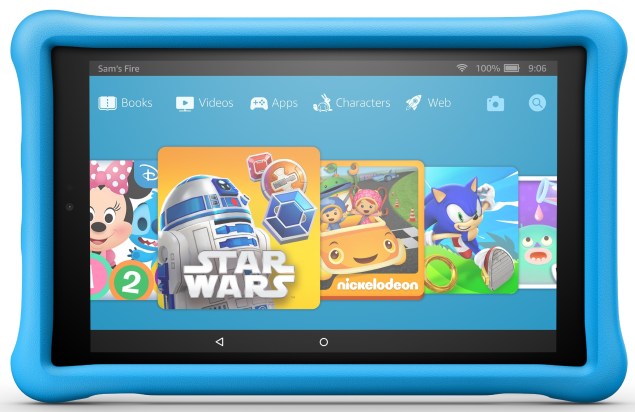 Priced at $200, the package includes a sturdy child-proof case, plus a year’s access to Amazon’s FreeTime Unlimited, which promises a special “whitelisted” selection of apps, games, books, videos, websites, and more. It also offers a parental dashboard and controls so parents can manage their kids’ tablet usage.