Scale Venture Partners has announced a new $400 million fund to continue with its previously stated mission of investing in “the future of work.” This is the VC firm’s sixth fund and follows a $335 million fund from two years ago.

Foster City, California-based Scale Venture Partners was the Bank of America’s in-house VC arm from 2000 (under the name BA Venture Partners), but it was spun out on its own in 2007 with a new name.

Today, it counts a number of notable cloud and SaaS startups in its portfolio, with exits including HubSpot, Box, and DocuSign. Such startups remain part of the firm’s agenda moving forward, but judging by its more recent investments, Scale Venture Partners is betting heavily on automation. Its investments in that area include AI-powered email authentication platform Agari; data privacy management platform BigID; AI-powered writing platform Textio; Locus Robotics; and DroneDeploy, an image analysis platform for commercial drone operators.

“The major technology trend for the past 20 years was the platform shift to the cloud,” noted Scale Venture Partners’ Rory O’Driscoll. “That move is not yet complete, but cloud software is a crowded, competitive, and fast-maturing market. The big story for the next 20 years will be about the addition of meaningful elements of artificial intelligence to make cloud software and the humans that use it more productive.

Scale Venture Partner’s new fund is the latest in a line of funds to launch in recent times, with Index Ventures yesterday announcing $1.65 billion across two funds and Bullpen Capital recently closing its fourth post-seed fund at $140 million. A bunch of big new funds have also emerged from Europe over the past few weeks.

In addition to the new fund, Scale Venture Partners has also unveiled a new platform designed to give private cloud companies insights into their own growth status.

Launching today in beta, Scale Studio effectively takes Scale Venture Partners’ own performance data garnered from its SaaS and cloud portfolio companies and allows any similar company to use it as a benchmark for their own performance. For example, a startup can provide their quarterly sales revenue and compare that to revenue from other companies at a similar stage of growth. 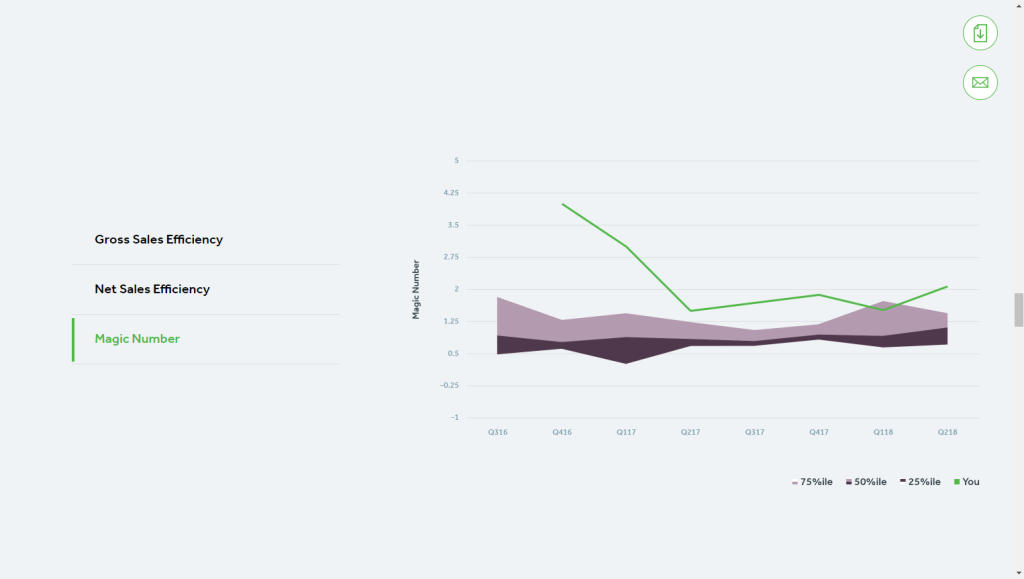 “We envision this platform to be broad, and we want it to be the go-to spot for everything that an entrepreneur might need to successfully scale their business,” added Scale Venture Partners’ Stacey Bishop. “We’re beginning with metrics and benchmarks, but eventually we’ll expand into other areas that will help an entrepreneur create category-defining companies.”

Scale Studio will be available via its own dedicated website, where companies can plug in their ​metrics to generate insights into their growth trajectory​, efficiency, and churn. It will include a feature that gives advice to companies if their numbers fall short either of their own goals or the performance of their peers.

The platform is currently open to applicants as part of a closed beta program, but it will open to general availability later this summer. 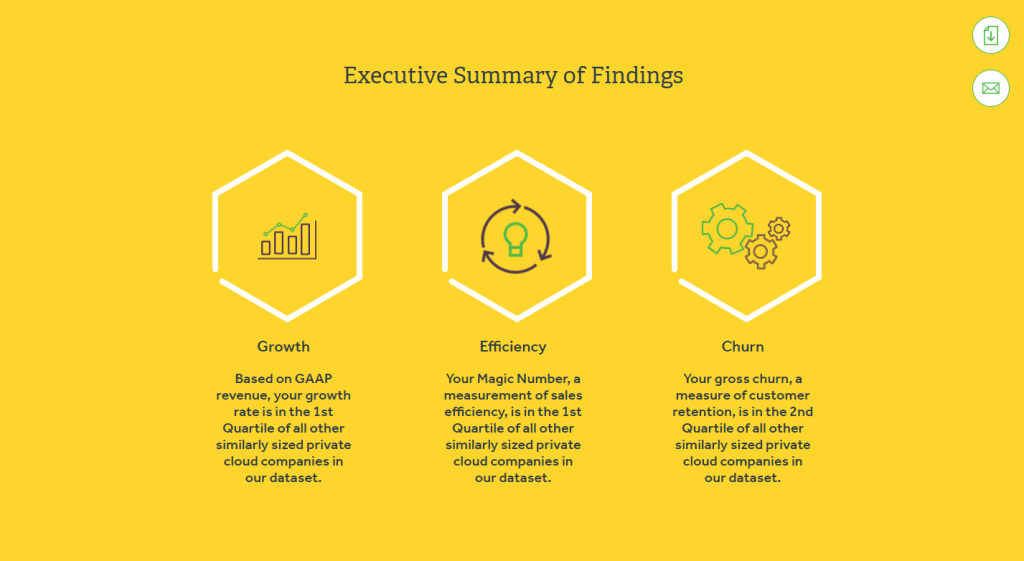 Above: Executive summary of findings

So what’s in this for Scale Venture Partners? Apparently nothing, beyond playing the good guy — though it is worth noting here that as more companies punch their numbers into the system, the more benchmarking data the VC firm will be able to offer. This data will also help companies in Scale Venture Partners’ portfolio, so the platform isn’t entirely altruistic in its mission.

“We’ve been fortunate enough to partner with category-defining companies like Box, DocuSign, JFrog, CloudHealth, KeepTruckin’, and Textio, and help them along the way by applying our formulaic approach to scaling,” Bishop continued.

“Doing so has allowed them to become some of the biggest brands that forever change the way that businesses work. And while our heart is in helping the entrepreneur, we simply can’t invest in every single company that we come across. But what if we could find a way to ‘scale’ the work that we do? What if we could figure out a way to easily share our scaling experience with our community of entrepreneurs? Scale Studio is our ‘open source’ contribution to the startup world, and giving entrepreneurs access to high-quality metrics and benchmarks is a great place to start.”