Cameras with high megapixel counts generally require serious image quality or performance tradeoffs, but Sony is forging ahead with the 48-megapixel IMX586, a sensor that will appear in 2019 smartphones. Sony says that it is the highest-spec smartphone sensor to date, surpassing Nokia’s famous 41-megapixel camera in the 808 PureView and the 40-megapixel camera found in Huawei’s P20 Pro.

With an 8000 x 6000 resolution, the new chip delivers more than twice the pixel count of current smartphone cameras, which means that — with an optically clear lens — images will be noticeably sharper, and more capable of being cropped. As the images above and below suggest, the new sensor will take a much larger photo that can be zoomed into without losing pixel-level detail.

Video fans will also find the new sensor compelling. Sony says it can deliver full 48-megapixel performance at 30 frames per second, with 4K video at up to 90fps, 1080p video at up to 240fps, and cropped 720p video at up to 480fps. Users can expect gigantic file sizes, however, as high-resolution and high frame rate videos eat storage capacity like nothing else. 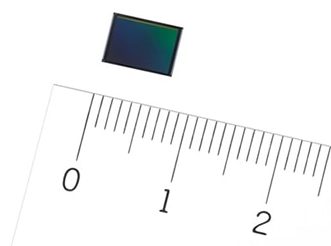 Above: The IMX586 is surprisingly tiny given its megapixel count.

Despite its 48-megapixel resolution, the chip can fit into pretty much any phone. It’s a 1/2-type chip measuring 8mm on the diagonal, and since it uses familiar stacked CMOS image sensor technology, it offers expected modern features, such as HDR imaging and image plane phase-difference autofocus — the latter important for producing optically sharp images.

Realistically, ultra high pixel quantities tend to degrade pixel quality, an issue Sony says it has addressed with the sensor’s design. While the IMX586 uses remarkably tiny 0.8-micron pixels, Sony says it is incorporating a Quad Bayer color filter array, which uses clusters of four same-colored pixels, allowing each pixel to lean on data from its neighbors.

The company claims that this will let the IMX586 deliver light sensitivity identical to a 12-megapixel image based on 1.6-micron pixels, though it also suggests that the raw pixel data — unsurprisingly —  won’t equal output from the latest standalone cameras. Additionally, Sony is promising “superior dynamic range 4 times greater than conventional units,” with the ability to preserve details in highlights and shadows.

Sony will start shipping samples of the IMX586 in September, with production volumes commencing in 2019, so it’s unlikely to show up in late 2018 devices. Expect it to debut in Sony phones first, followed by others — potentially iPhones and premium Android phones — in the months that follow.