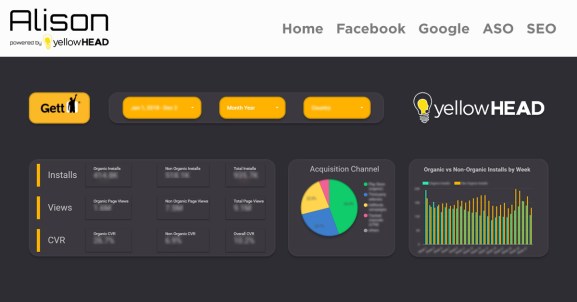 Sometimes it’s not just the data you have that makes a difference for your mobile app or game business. It’s also about how you look at it, according to digital marketing agency YellowHead.

YellowHead has specialized in app store optimization (ASO), or obtaining mobile users by optimizing an app for the way it can be discovered in an app store. As the cost of user acquisition soars, mobile game and app developers need alternatives. With app store optimization, developers make sure that their keywords, descriptions, icons, and metadata make their app easily discoverable amid a sea of a few million apps.

Now Israel-based YellowHead is launching a data visualization platform for ASO so that developers can get better results from ads. The new data analysis tool brings together data from the Google Play Developer Console and App Store Connect via applications programming interface integration, and it turns the results into actionable insights.

YellowHead said the new, fully customizable tool provides intuitive visualization and analysis of impressions, page views, and installs; paid-to-organic ratios; install-to-uninstall ratios; and more. All of this data can be broken down by country, date range, and source.

The tool automatically updates data on a daily basis in a completely private and secure manner. Looking forward, integration with AppsFlyer, Adjust, and Kochava is currently in beta, and the platform is also set to include automated keyword ranking reports. This is the first ASO tool of its kind, YellowHead said.

Developed by the company’s in-house business intelligence tech team, the automated analytical tool gives YellowHead’s customers a better picture of the performance of their app marketing efforts across channels, including paid and organic user acquisition trends. The response from current partners, including Miniclip, Tinder, Gett, GSN, and Vivid Games, has been extremely enthusiastic, YellowHead said.

“YellowHead’s new ASO data visualization platform provides an intuitive, aesthetic, and shareable way to stay up to date on our ASO performance in one convenient place,” said Oded Onn, global head of digital marketing at Gett.

YellowHead helps companies with performance marketing activities, including Google and Facebook user acquisition, ASO, and search engine optimization (SEO). These partners now have one place where they can view the performance of all of these activities and thereby reach data-based decisions quickly and easily, the company said.

Last year, YellowHead launched Alison, a machine learning technology that predicts performance for user acquisition campaigns. YellowHead was founded in 2013 and is a self-funded company with over 70 employees.