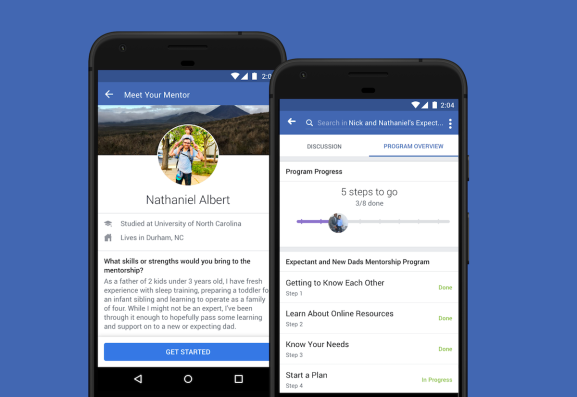 As some users are souring on sharing aspects of their personal life on Facebook, the company wants more people to turn to the platform for professional development.

Facebook announced today that it is bringing Mentorship, a networking tool it piloted last year, to Groups. The announcement comes as Facebook continues to push Groups as a space for positive interaction on Facebook.

For now, the Mentorship tool is only available to “people within select groups focused on parenting, professional and personal development” — which makes sense, because not all Facebook Groups, especially those centered around personal interests, are going to be a natural fit for networking. The responsibility falls to Group Admins to create a mentorship program, and to pair interested people up as mentors/mentees. Facebook does provide a guided program for Group Admins to follow if they choose, which provides suggestions on how often mentors/mentees should check in and what they might want to talk about.

It will be interesting to see what types of Groups are more keen to take advantage of the tool than others — Facebook mentioned Mama Dragons, a group for mothers of LGBTQIA children, as one of the Groups piloting the tool. Finding a mentor can be a bit of an awkward process even with in-person networking groups, and members might be hesitant about signing up to be part of a mentorship program without first knowing who else is involved. On the other hand, with Facebook putting Group admins in charge of the process, it eliminates the need for members to take the first step in finding a mentor.

When CEO Mark Zuckerberg toured the U.S. as part of his annual personal challenge last year, he talked about his desire to find ways to connect people on Facebook with potential mentors. Politico also reported earlier this year that Facebook is partnering with Stanford economist Raj Chetty for a study on how social connections play a role in income inequality — and perhaps, how finding new social connections on platforms like Facebook could eliminate that inequality.

It’s clear that Facebook wants to position itself as a place for people to improve themselves both professionally and personally, and the new mentorship tool is an extension of that.