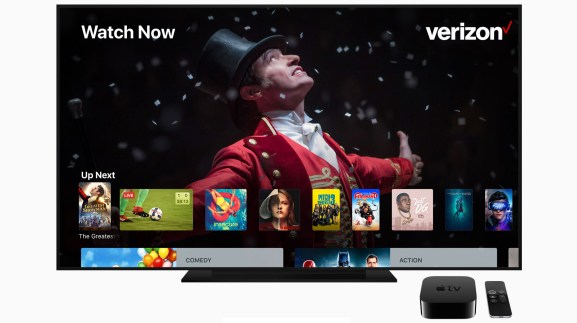 When cellular carriers made bets on what the earliest 5G networks would look like, AT&T said “mobile” — portable devices — and Verizon said “fixed,” or home-tethered devices. It’s much easier to get excited about 5G-ready phones, tablets, cars, and VR headsets than cable modems, but Verizon predicted that portable devices wouldn’t actually be ready in time for 5G’s launch, so it chose a potentially boring route to be “first” to offer 5G service.

Verizon turned out to be largely correct: With 5G network launches only months away, no one (except Motorola) has actually debuted a mobile 5G device. On the other hand, Samsung has 5G home routers ready to go for Verizon’s fixed 5G launch. The problem: “We’re ready to replace your cable modem” is a weak sales pitch for Verizon. To get people to sign up for 5G service, it needs something tangible and exciting.

Enter the Apple TV. Apple tried for years to partner with cable companies on a set-top box replacement, but wound up taking its own path with the fifth-generation Apple TV, known as Apple TV 4K. The small black box supports 4K videos, Dolby Vision HDR, video apps, cheap games, content streaming from iOS devices, and soon Dolby Atmos audio. A handful of cable companies have started to offer the Apple TV 4K as a set-top box alternative for customers.

Verizon announced that it will offer the Apple TV as part of its 5G residential plans, and the reason is clear: It needs the Apple TV to serve as the public face of its 5G service, because without some video angle, all it’s offering is a replacement cable modem. Imagine how a customer would respond to the typical sales pitch.

Verizon: Are you dissatisfied with your home Internet package? Wouldn’t you like faster speeds?

Customer: It’s not great but it’s OK. How much for your service?

Verizon: Uh… about the same price as your current package. By the way, we’ll also have to schedule an appointment to set up our 5G modem at your place, and you’ll have to agree to a contract.

Verizon: But it will be faster. Maybe 10 or 100 times faster than your current service.

Customer: I’ve heard that before. And my cable company says it’s going to upgrade my service for free. (Click)

Armed with the Apple TV 4K, Verizon has the ability to make a more complex pitch: Bring 5G into your home, and you’ll get faster Internet and some free TV services, too. Because the Apple TV 4K is extremely easy to set up, the customer can do it while the 5G modem’s being installed. The moment the 5G hardware is up, videos will be ready to watch, since the Apple TV has been optimized to start streaming quickly even without a 5G connection.

Not everyone will want an Apple TV 4K, though, and Verizon’s apparently prepared for that. Rather than relying exclusively on Apple, Verizon will also offer a YouTube TV subscription — 60 networks’ worth of streaming channels — as a one-or-the-other alternative to the Apple TV 4K hardware. So for Verizon 5G internet customers, the choice will be between getting completely free TV service or a free set-top box that you can customize as you prefer, including support for iTunes videos, Netflix, Hulu, and Amazon Prime Video.

I’m not willing to predict at this point that Verizon’s home 5G pitch will actually work — pricing and other specifics are going to make a huge difference in either popularizing or sinking fixed 5G as a cable alternative. Moreover, the company is being far more tentative than AT&T in its initial 5G launch commitments: It’s starting with only four 5G cities in 2018 — Indianapolis has just been added to Sacramento, Los Angeles, and Houston — with a promise of going wider in 2019.

But if I was in one of those cities, I’d certainly be intrigued enough by the prospect of free Apple hardware or TV service to learn more about switching to a 5G modem. That’s exactly what Verizon needs right now.