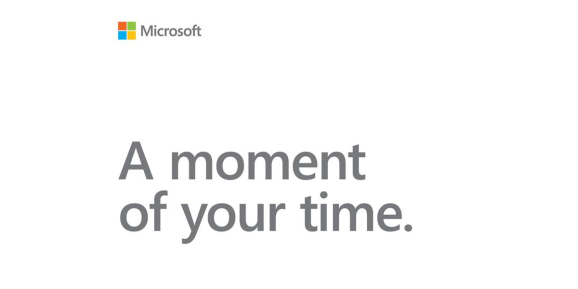 Microsoft has sent out invites for an October 2 event in New York City, exactly a week before Google will host its hardware event in the same city. Updates to hardware are expected, but we have reason to believe a Surface Phone announcement is highly unlikely.

The event invite itself is very vague. The only tagline is “A moment of your time.” followed by the date and time (October 2 at 4:00 p.m. Eastern) and the address (Industria Studios at 775 Washington Street).

The event will be similar to last year’s, where Microsoft unveiled the Surface Book 2. While hardware was the main attraction, the company did make a point to talk about how its Surface line ties in with its broader software and services vision. That will likely stay the same this year, so expect talk of Windows 10, Microsoft Office, and new pushes like Your Phone.

Now that I think of it, the word “time” in the event tagline could be a hint that we’ll get an update on Windows Timeline. Or maybe that’s just what Microsoft wants us to think. A Surface watch? OK, I’ll stop.

While the Surface Go only just arrived last month, and a Surface Book update might be too soon, the Surface Studio was announced two years ago. The Surface Pro and the Surface Laptop could also use a refresh. Microsoft typically launches new Surface devices in October, so a new form factor is also possible, but it won’t be a phone.

VentureBeat will be on site covering the news live.