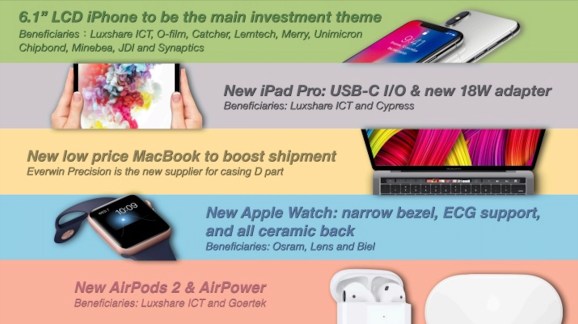 Few analyst predictions matter in the world of upcoming Apple products, but TF Securities’ Ming-Chi Kuo is an exception due to his superb track record, and his latest report adds details on many of the key new devices Apple is expected to announce over the next month. A research note (via MacRumors) spotlights impending changes to five key products: the Apple Watch, AirPods, MacBook, iPad Pro, and iPhone Xr.

Apart from previously known screen size increases, the key change to this year’s Apple Watch will be the addition of an electrocardiography (ECG or EKG) sensor, specifically an LED design from Osram. This part will enable the Apple Watch to perform more sophisticated heart monitoring, including the sort of heartbeat analysis previously found in chest monitors and standalone Apple Watch wristbands. Additionally, Apple will apparently switch to ceramic backs across all Apple Watch models, doing away with the plastic backs found in aluminum Apple Watches, and possibly increasing prices in the process.

Kuo also expects the AirPods to be bumped to version 2 alongside the release of Apple’s wireless charging mat AirPower. While Kuo provides little details on the changes in this report, both developments have been expected all year, with the second version of AirPods likely to add Hey Siri support and a superior wireless chip — possibly with better battery life.

Addressing a longstanding and still unresolved question, Kuo says that a 13-inch entry-level MacBook “may replace the position of the current 12-inch MacBook,” and will notably add a Touch ID fingerprint scanner — but not a Touch Bar. Rumors about this laptop have been all over the board this year, but generally agree that it will have a 13-inch Retina display in a housing inspired by the current 13-inch MacBook Air. Multiple reports have disagreed as to whether it will sit alongside the 12-inch MacBook and 13-inch MacBook Air, replace one of them, or replace both of them.

Additionally, Kuo reiterates prior predictions that the next-generation iPad Pro will adopt a USB-C interface and come with an 18-watt power adapter, though his language notably adds new wrinkles to both predictions. He claims that the iPad Pro will be “replacing Lightning with a USB-C interface,” and that the included adapter “cancels the removable plug design,” which if taken literally would suggest that Apple will turn the iPad Pro into a USB-C device and include a tethered (or in industry parlance, “captured”) USB-C charger.

It is possible, however, that the USB-C interface changes will be exclusively inside the iPad Pro for purposes of guaranteeing compatibility with the USB-C Power Delivery standard, and not impact the use of a Lightning port on the iPad’s bottom. Earlier predictions have been unclear on the extent of this change.

The year’s big seller, Kuo predicts, will be the 6.1-inch LCD iPhone now expected to be known as the iPhone Xr. He believes that it will account for 50 to 55 percent of new model shipments through the end of this year, and 65 to 70 percent through the first half of 2019. But he also throws cold water on earlier predictions that Apple would include the new 18-watt power adapter with iPhones: Kuo briefly claims that they’ll retain a Lightning interface, and be bundled with the current 5-watt power adapter.