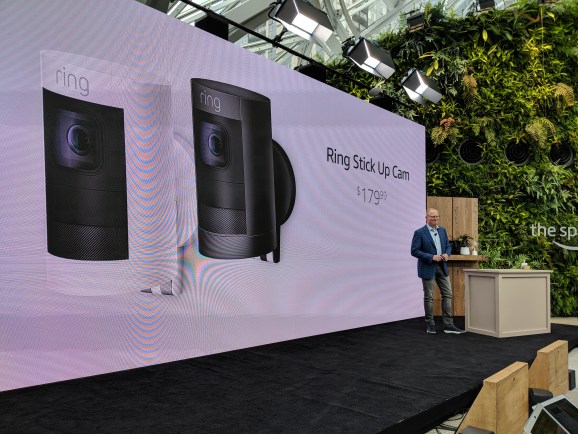 Amazon today introduced about a dozen different devices, including a new Echo Dot and Echo Show, as well as several new features such as Alexa Guard, which sends users notifications when their Echo smart speakers hear the sound of breaking glass or a smoke or carbon monoxide alarm.

“Say ‘Alexa, I’m leaving’ and it immediately moves your Echoes into Guard Mode throughout your house with a few smart alerts that if detected send a notification to your phone,” said Amazon VP David Limp in a presentation.

Alexa Guard will also be able to randomize the lights in your home when you’re away to make it appear as if you’re there, and integrate with Ring and ADT so alerts can also be sent to a security company.

Acquired by Amazon in February, Ring today also announced the debut of Stick Up, its first indoor and outdoor security cameras, which begin shipping Oct. 18 at a cost of $179.

An API to deliver audible alerts from Alexa each time a contact sensor or motion detector is triggered was introduced last month. The API can also be used to turn on lights, or even schedule your favorite song to play when you enter a room.

Amazon also rolled out the Fire TV Recast, its first DVR; the Echo Link and Echo Sub to amplify sound from Echo speakers; a microphone and wall clock; and Echo Auto, a device available by invite only.

Other new features announced today include the Doorbells API for answering your video doorbell with an Echo Show; routines for kids; the Alexa Music Skills API to integrate more music services like Tidal; and improvements to the way you connect Wi-Fi to smart home devices.