Voice apps from Fitstar that use GIFs to demonstrate how to do an exercise, and H&M Home, which offers full-screen visualizations, provide examples of new visual options available for developers.

Google Assistant got an overhaul of the visual experience on Android smartphones today as well, with improvements to web search results, weather, sports box scores, and the visual snapshot of your day Google Assistant can serve up.

Also introduced today to make the lives of both users and Google Assistant developers easier is Google Sign-In for the Assistant, which gets rid of the need for a Google Assistant user to create an account or type a login or password in order to maintain a personalized experience with a voice app.

The new sign-in method paired with the Voice Match identification system means people can use a verified email address and voice to carry out purchases or log in to a voice app. 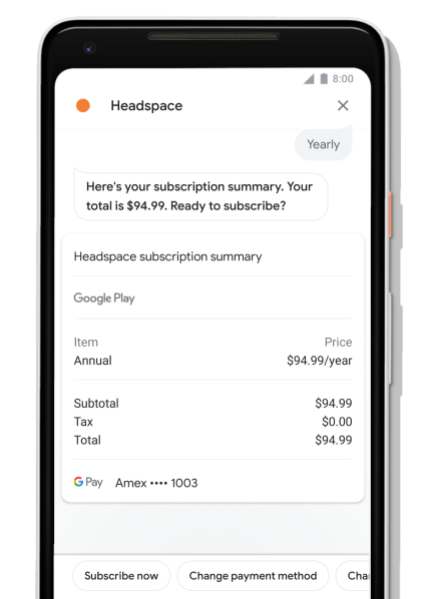 “For developers, Google Sign-In also makes it easier to support login and personalize your Action for users. Previously, developers needed to build an account system and support OAuth-based account linking in order to personalize their Action. Now, you have the option to use Google Sign-In to support login for any user with a Google account,” Google Assistant product manager Tarun Jain said in a blog post announcing the news.

The new visual approach is in part being taken because Google says nearly half of all interactions with Google Assistant this year have involved both voice and touch.

The more visual display option is also being introduced less than a week before a Made by Google hardware event is scheduled to take place in New York City, where the Pixel 3 smartphone and a smart speaker with a screen called the Home Hub are expected to make their debut.

Other devices that bring a visual interface to a smart speaker, such as the Lenovo Smart Display and JBL Link View, have been made available for purchase in recent months and offer some exclusive experiences with Google Assistant not yet available in other devices, such as voice-only control for YouTube videos, weather forecasts, and maps when you ask for directions.

Amazon introduced the Alexa Presentation Language for a more visual experience with Alexa skills at its event late last month. APL will be used to drive experiences on the second-generation Echo Show due out later this month as well as other surfaces such as Lenovo tablets, Sony smart televisions, and Fire tablets in Show Mode.

Last week, Amazon enabled skills developers to introduce the sale of consumables during conversations with a voice app, such as an extra life when playing a game or premium content for a meditation app.