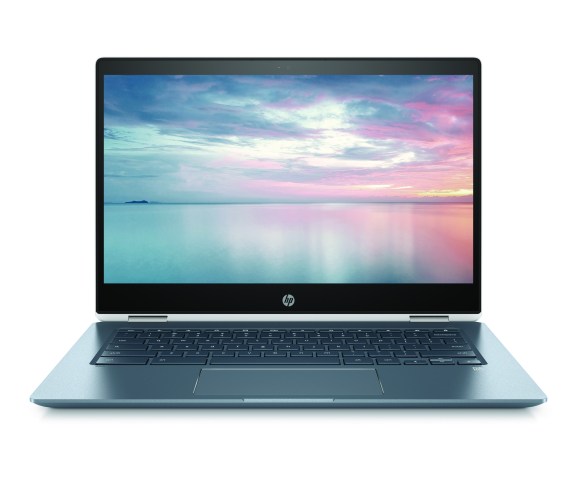 Another day, another Chromebook — and this time around, it’s from HP. The Palo Alto company today announced the HP Chromebook x360 14, the newest convertible laptop in its product portfolio to run Google’s Chrome OS operating system. At 16mm, HP says it’s one of its thinnest to date.

The Chromebook x360 14 weighs in at about 4 pounds, measures 12.81 x 8.93 x 0.63 inches, and features a 3D-stamped blue backlit keyboard made of anodized aluminum with a “diamond-cut” trackpad. The 14-inch 1920 x 1080 pixel WLED IPS display touchscreen, flanked on either side by stereo speakers tuned by Bang & Olufsen, has a bezel just 7.5mm wide, which HP says is one of the thinnest on a Chromebook of its price point. 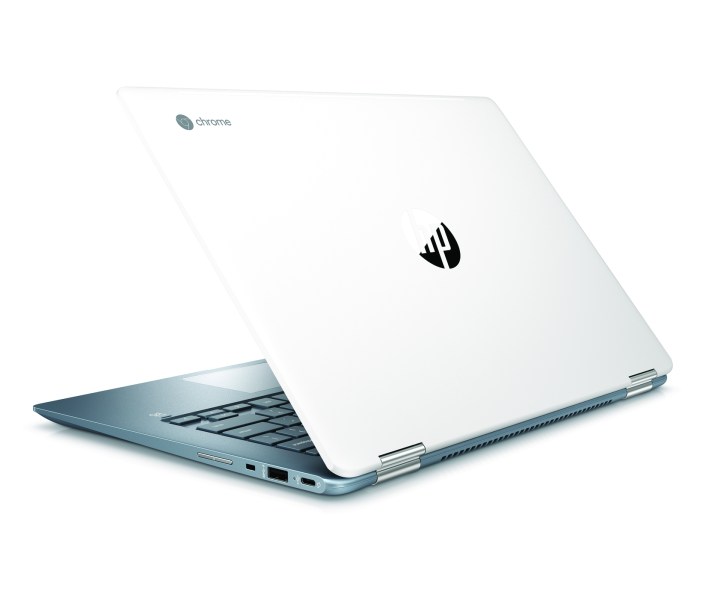 The Chromebook x360 14 comes in a ceramic-like Advanced Electrodeposition (AED) white or blue finish and is available for preorder starting today for $599 at HP’s website and Best Buy. It’s expected to hit store shelves on October 21, and buyers get two years of complimentary 100GB Google Drive storage.

HP’s new 14-inch Chromebook comes just a few months after the launch of its 12-inch Chromebook x2, which also starts at $600 and can be used as a standalone tablet. It follows on the heels of Dell’s Inspiron 7480 Chromebook, a $600 2-in-1 14-inch convertible with an Intel 8th Gen Core i3 processor, 4GB of main memory, up to 128GB of flash storage, a backlit keyboard, and a battery that lasts up to 10 hours on a charge. And it competes squarely with the likes of Lenovo’s new Yoga Chromebooks, which also have 360-degree hinges.

“As customers continue to embrace the Chromebook ecosystem, we have learned that they are often seeking the same design and features that make our other convertible devices so popular,” Kevin Frost, vice president and general manager of consumer PCs at HP, said in a statement. “With the success of the HP Chromebook x2 earlier this year, customers have signaled they want premium choices and powerful experiences in their ChromeOS devices. We are excited to expand our Chromebook portfolio with the HP Chromebook x360 14 — an unparalleled Chrome OS experience with a head-turning design that delivers the power and performance our customers expect.”